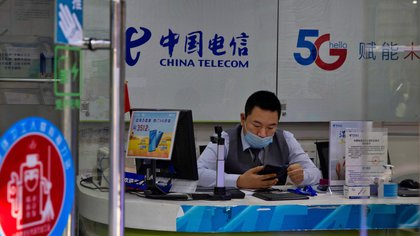 Beijing, Nov 16 . .- China today urged the United States to stop the “irrational repression” of its companies after the president of that country, Donald Trump, signed an executive order last week that prohibits investing in 31 Chinese companies that, according to Washington, collaborate with the Chinese Army.
Trump’s measure prevents US companies or citizens from owning shares directly or through investment funds of any of the companies identified by the US as collaborators with the Chinese People’s Liberation Army (PLA).
The designated companies include telecommunications companies such as China Telecom and China Mobile.
“To label these companies as controlled by the military is to ignore the facts. It has no legal basis or principle, which China strongly opposes. We urge the US to stop the irrational repression of the affected companies and provide a fair and non-discriminatory trading environment, “a spokesman for the Chinese Ministry of Commerce said today.
According to a statement posted on the website of this portfolio, “the US often uses the pretext of protecting its national security to veto Chinese companies” or to prevent US investors from entering the Chinese market, which it qualifies as “a serious violation of the principles of market competition for which it has always advocated “.
The spokesman adds that “Chinese companies operate in other countries in accordance with their relevant laws and regulations” and that “the actions of a few will not be able to suppress market forces.”
The US ban will take effect on January 11, Robert O’Brien, the White House National Security Advisor, announced on November 12.
China and the US maintain tense relations that have been deteriorating since March 2018, when Trump began a trade conflict that resulted in a “cold war” that also confronts both powers on a technological and strategic level.