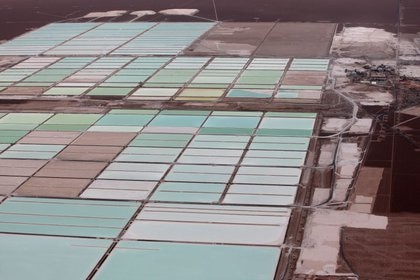 Aerial archival image of the brine pools at SQM’s lithium mine in the Atacama desert, Chile. January 10, 2013. REUTERS / Iván Alvarado

SANTIAGO, Nov 19 (.) – Chilean producer SQM continued to increase its lithium sales in the third quarter even as low prices hit its earnings, prompting the world’s second-largest producer of the metal to announce a plan to further increase lithium production. production capacity by 2023.

SQM said it sold 17,700 tons of lithium between July and September, 56% more than in the same period of the previous year. He also said that he would likely sell 30% more lithium this year and promised a similar increase in sales in 2021.

Lithium miners increased production last year in anticipation of a deluge of demand from automakers in 2020, but the COVID-19 pandemic slowed the electric vehicle revolution, sapping profits and forcing many companies to archive their expansion plans.

SQM’s net income plummeted 97% year-on-year to $ 1.7 million in the quarter, dragged down by low prices and a payment related to a class action lawsuit against the firm in the United States. However, the company said its current plans to boost its production of lithium carbonate and lithium hydroxide, two of its key products, by the second half of 2021 were still on track.

Strong sales and recovery in demand from China, the company added, had supported the decision to further increase production capacity, to 180,000 and 30,000 metric tons of lithium carbonate and lithium hydroxide, respectively, by 2023.

“Regardless of the significant reduction in brine extraction,” CEO Ricardo Ramos said in Wednesday night’s report.

The Chilean miner, long under scrutiny for its environmental practices, announced plans in October to immediately cut the use of fresh water and lithium-rich brine from the Salar de Atacama.

The company said it will spend $ 1.3 billion on a variety of projects in Chile between 2021 and 2024, even as profits have been hit amid the coronavirus pandemic.

(Reporting by Dave Sherwood, edited in Spanish by Fabián Cambero)