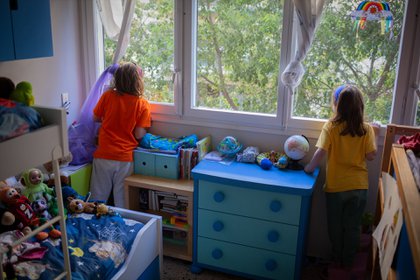 04/25/2020 Several girls play at their home in Barcelona one day before minors under 14 are allowed to leave their homes, due to the lifting of some measures imposed by the Covid-19 crisis in the country. In Barcelona, ​​Catalonia, (Spain), April 25, 2020. POLITICS David Zorrakino – Europa Press

10,000 children participate in a consultation for the EU Strategy on Children’s Rights

One in five children in the European Union has claimed to be growing up unhappy and anxious about the future, according to the report ‘Our Europe. Our rights. Our Future ‘published this Tuesday by ChildFund Alliance, Eurochild, Save The Children, UNICEF and World Vision in collaboration with the European Commission.

The study, for which 10,000 children between the ages of 11 and 17 were consulted, aims to be a benchmark for shaping the design of the next European Union Strategy on Children’s Rights and the Child Guarantee.

The document indicates that the COVID-19 pandemic has pushed children and young people in Europe and elsewhere to feel pressure and uncertainty.

Specifically, one in ten children surveyed has indicated that they live with mental health problems or symptoms such as depression or anxiety, with girls being the ones who felt more at risk than boys, while older minors have reported higher levels of problems.

A third of the children surveyed have acknowledged having suffered discrimination or exclusion, a situation that, likewise, 50 percent of children with disabilities, migrants, ethnic minorities or the LGTBQ + community have suffered.

According to the report, three-quarters of the children consulted have also said they are happy in school, but 80 percent of the 17-year-olds have said that they feel that the education offered does not prepare them well for the future.

In this sense, the majority of children have stressed that they would like to make changes in their school life. Specifically, 62 percent have chosen to have less homework, and 57 percent to have more interesting classes.

Likewise, almost a third have influenced that they would like to influence the content of the school curriculum, with more sports activities -33 percent-, learning about children’s rights -31 percent- and more artistic subjects -31 percent–.

On the other hand, almost all the minors surveyed have indicated that they have heard about children’s rights, while 88 percent have declared to be aware of climate change and its impact on the community; 8 percent more or less conscious and 4 percent were not sure.

A STEP TOWARDS CHILDREN’S PARTICIPATION

“This consultation of children is a turning point for us at the European Commission and represents an important step towards greater participation by children. Children are experts on the issues that concern them and this consultation shows once again that they are already important participants in the here and now “, has specified the vice president of the European Commission, Dubravka Suica.

For their part, representatives of the ChildFund Alliance, Eurochild, Save the Children, UNICEF and World Vision have described the report as “historic”, as it is the first time that “so many children and young people can directly influence and shape policy. of the European Union”.

“It could not come at a more important time, just when children are facing the psychological and concrete consequences of the pandemic, which has forced them to adapt to a new reality, during the next few years,” the organizations have asserted.

Similarly, the European Commissioner for Employment and Social Rights, Nicholas Schmit, has welcomed “this consultation with great satisfaction” and thanked the thousands of children who have given their contributions. “Your voices are being heard,” he highlighted.

“Building a comprehensive childhood rights strategy must include all relevant areas, from health to social inclusion, through education, justice respectful of children, migrant children and participation in the democratic process. It belongs to the It is of the utmost importance to listen to children and know their opinions about these issues “, has also insisted the European Commissioner for Justice, Didier Reynders.