Sarah Kohan She is Chicharito’s wife and the mother of their two children. The second was six weeks ago now, and the 24-year-old Australian model wanted to show off her figure on Instagram a month and a half after giving birth posting a full nude in front of the mirror at home.

With one arm he covers his chest and the lower part hides it under the accompanying text the photograph in one of his Instagram stories. Sarah Kohan says that she has not trained in recent times due to her pregnancies and still shows off her figure only six weeks after her second delivery. 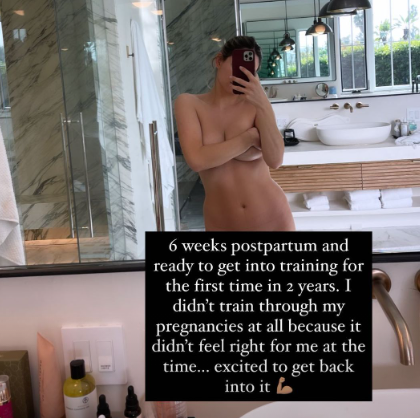 The photo uploaded by Sarah Kohan.

“Six weeks after delivery and I am ready to start training after two years. I didn’t train at all during my pregnancies because I didn’t feel like it at the time. Excited to be back now! ”Says the young Australian-born model, who has once again set social media on fire by posing without any clothes in the bathroom. The couple lives in the United States because Chicharito plays in Los Angeles Galaxy of MLS, a team to which he left after his adventure in Sevilla. With him, a Sarah Kohan who triumphs on Instagram among her 1.5 million followers with fiery poses and even with nudes in which censorship mocks like the latter.

A couple settled despite the rumors that emerged a few weeks ago and that the Australian was in charge of denying in her networks: “I would not have to explain anything, but things in the media have gotten out of hand. I’m tired of the messages that point out that Diego is Noah’s father, just because of the color of his eyes. His father is Javier! I was already pregnant with Noah when I met Diego. Noah’s eyes are the same color as my mother. End of story. Stop bothering my family.