Luis Basterra with the new Secretary of Agriculture, Jorge Solmi, and the outgoing Julián Echazarreta

In the midst of a day full of tension from the political point of view after the request for the resignation of the Minister of Health, Ginés González García, by the President of the Nation, Last night the head of the agricultural portfolio, Luis Basterra, announced changes in his cabinet, following the resignation of the Secretary of Agriculture, Julián Echazarreta, and the displacement of the Director of Agricultural Commercial Control, Marcelo Rossi.

By decision of Minister Basterra, Jorge Solmi, a former leader of the Argentine Agrarian Federation, who in 2008 confronted Kirchnerism through the famous “Resolution 125”, of mobile withholdings on soybeans, wheat, corn and sunflower, which produced the first political defeat of Kirchnerism, and He held a seat as a provincial deputy for the province of Buenos Aires on behalf of the Renovador Front, he will assume as Secretary of Agriculture. Until now, the new official served as Director of the Buenos Aires Guarantee Fund (FOGABA).

Solmi’s appointment represents a double signal: a rapprochement towards the agricultural sector through the integration of a historic Agrarian Federation, the organization that is part of the Liaison Table with which the government feels a priori more at ease, due to history and political affinities, and a greater participation of massismo in the formulation and application of official policies towards a key sector of the economy and the largest provider of foreign currency in Argentina.

Solmi’s appointment is a double signal: a rapprochement towards the agrarian sector through a history of the organization of the Liaison Table more akin to the government, and a greater participation of massismo in the formulation and application of policies towards the sector that provides more foreign exchange to the Argentine economy

A native of Pergamino, in the heart of the Humid Pampa, Solmi has the profile of a born negotiator; He is a lawyer and has two Masters on his CV. He joined the Renovador Front in 2012, the year before Massa defeated Kirchnerism in the 2013 legislative elections and finally overthrew the re-election project of Cristina Fernández de Kirchner.

The former Secretary is a man linked to the cooperative movement and was Vice President of the Buenos Aires Cereal Exchange.

For its part, Luciano Zarich, who will occupy the position of Rossi, is a Public Accountant, a native of the Cordovan district of Arias, and was appointed last year by Alberto Fernández as sub-controller of the agro-exporter Vicentin, in the Government’s attempt to intervene and expropriate the company from the north Santa Fe. In addition, he had already served as National Director of Enrollment and Inspection in the agricultural portfolio.

Rossi, is a technician of radical origin who has a high prestige in the world of agricultural marketing. He had been the first official to resist the controls of the former Secretary of Internal Trade, Guillermo Moreno, in 2007 and that is why he was summoned again in 2016, at a time when Ricardo Buryaile was in charge of the Ministry of Agroindustry, during Mauricio Macri’s presidential administration. . He survived one more year in that position under Alberto Fernández.

The former official in recent weeks, at the request of the Central Bank, removed the registration from the former cereal company Díaz & Forti, which operated the Vicentin plants in the ports of Gran Rosario. The justice gave the reason to Marcelo Rossi, in the case where the company was accused of not liquidating currency near 400 million dollars.

Both changes in the cabinet of the Ministry of Agriculture, Livestock and Fisheries became effective this Saturday from the publication in the Official bulletin of Decree 121/2021 and of the Administrative Decision 111/2021. 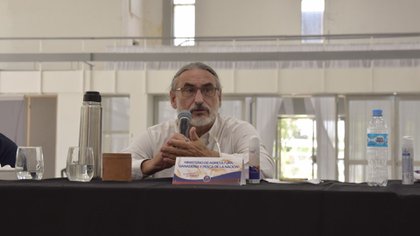 The head of the agricultural portfolio, Luis Basterra, announced changes in his cabinet

The changes in the ministry take place in moments of cross between the Government and the field due to the increase in the price of food. An issue that led to a meeting last week between Alberto Fernández and the Liaison Board, where the president promised not to raise withholdings or intervene in the markets, as happened weeks ago when the Ministry of Agriculture announced the closure of exports corn. A measure that left without effect, after confirming that there was corn to supply the domestic market until the new cereal harvest entered.

This week the entities of the field came out with different communication campaigns to ensure that the producers are not price makers and that there is a high incidence of taxes in the final price of food. A situation that affects the marketing chains, especially the producers of regional economies, which in many cases do not get to charge 10% of the value in the gondola, as reflected in a report presented in the last hours by the Argentine Agrarian Federation.

To all this is added what happened in recent days with the criticisms that emerged of the Liaison Table from a sector of the workers of the National Institute of Agricultural Technology (INTA) who support the Frente de Todos and to which the new secretary joined general of the Uatre union, José Voytenco from Chaco, who intends to exclude from the directory of the National Registry of Rural Workers (RENATRE) the representatives of the four entities of agricultural producers.