In recent years several attempts have been made to launch autonomous car racing (by Roborace, for example). Now, within the framework of the CES 2021 technology fair, they have announced a new meeting of this style called Indy Autonomous Challenge (IAC). Be An autonomous vehicle race with varsity teams and various specs: The cars are all mechanically identical and it is each team’s software that should give it a competitive advantage.

Participants include 30 teams from public and private institutions around the world. Organizers say the goal of the contest is to encourage students to “Imagine, invent and test a new generation of automated vehicle software and inspire the next generation of STEM talent.” The prize for winning the race is $ 1 million, and there will be additional prizes awarded to winners of simulation races and hackathons. 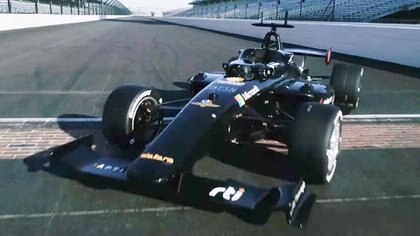 With a racing car chassis designed by the Italian company Dallara, sensors and controls will be added to it, allowing it to operate autonomously.

At the technology fair they presented the car model IAC It is based on Dallara’s IL-15 chassis, powered by a Mazda MZR-R turbocharged four-cylinder engine. Precisely, to guarantee equal conditions, each participant will receive a model of that car. Then, they will need to create the autonomous software that takes that car around the track.

With a racing car chassis designed by the Italian company Dallara, they will add sensors and controls, allowing you to operate autonomously. It is hoped that this experience can demonstrate the success of this type of event, so that autonomous careers grow.

Last year, for example, at a demonstration of Roborace, an autonomous car crashed into a wall. This company has organized the world’s first extreme competition for autonomous AI development teams. It is worth noting that these are races where there is no complete autonomy since the car does not “make decisions” on its own, but rather has no driver, and is remotely controlled by advanced AI software.

His first event was on the English circuit of Thruxton, where a great show of autonomy in racing was expected. Roborace is the first competition that faces life-size autonomous vehicles, with a presence on the platform Twitch, where he broadcast his first event, where teams of United States, United Kingdom, Austria, Italy and Switzerland.

A few years ago, in 2017, the company, during Formula E, conducted a test of this type in Argentina, which also ended with a crash (where there were no injuries). While the E-Prix in Buenos Aires was being held, Roborace chose this competition to expose the new category of driverless cars, to effectively carry out their first test.

The race was disputed by the vehicles DevBot 1, colored red, and DevBot 2, colored yellow. The latter got confused at curve 11 of the Buenos Aires route and collided with the walls at the foot of the Nereidas Fountain, in the Puerto Madero neighborhood of Buenos Aires.

There is certainly a lot of work to be done to create the perfect autonomous racing car, and these types of calls will inspire great minds to work on the autonomy of racing vehicles.

CES 2021 honors WOWCube, inspired by the Rubik’s cube, with an innovation award