Claudia Sheinbaum Pardo, Head of Government of Mexico City, announced in conjunction with the Ministry of Energy (Sener), the Federal Electricity Commission (CFE) and the National Autonomous University of Mexico (UNAM), two renewable energy projects in the Mexican capital.

One of them is to install photovoltaic panels on the roofs of the warehouses of the Central de Abasto (Yield), “The largest installation in the world inside a city”, which will have a capacity of 18 megawatts, generating 27.3 gigawatts per year, with which said plant will have a scope for 440,000 Ceda users.

Fadlala Akabani, Head of the Capital Economic Development Secretariat, indicated that among the economic benefits of this project will be the saving of 73.5 million pesos in electricity bills, a decrease in 13,852 tons of CO2, equivalent to what is absorbed by 890,000 trees during 25 years of operation of these panels. With an investment of 500 million pesos, it is estimated that its construction will begin this year and will be in June 2022 when the plant goes into operation.

“An urban solar field on the roof of the Central de Abasto, which can generate – according to the balance that the Federal Electricity Commission makes at the time 250 megawatts; that will help a lot to all the merchants of the Central de Abastos, and it is clean energy within the city ”, detailed Rocío Nahle, holder of the Sener; however, the CFE will be the one to make the corresponding balance. The second project consists of the conversion of municipal solid waste into charcoal pellets for thermoelectric plants of the CFE.

He also said that the resources saved can be used to partially pay the great cost it has for the CDMX the management of its urban waste “which more or less corresponds to an estimated 1,200, 1,400 million pesos a year.” 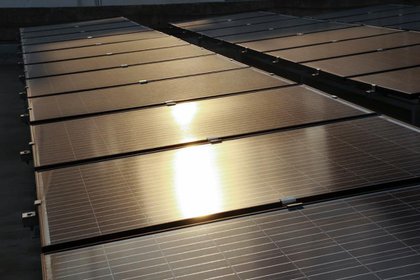 On the other hand, he mentioned that this project is planning an expansion; in the first phase, 72 tons per day of organic matter, in the second phase it would rise to 380, in the third phase to 1,250 tons and in the fourth phase to 2,500.

“All the rudeness of these four phases would occur exactly where the plant is located. compost (located north of the Benito Juárez Airport in Mexico City) ”.

It is worth mentioning that both projects will be financed with the Energy Transition and Sustainability Fund (Phase) of the Sener, therefore, the capital government will have federal resources, but it will be the CFE who will do the bidding and the respective award.

Energy crisis: they warned of another 48 complex hours and asked the population to save electricity

AMLO will blame the cursed past and promise, without arguments, an idyllic future: the harsh editorials for the massive blackouts in Mexico

This February 17 is Ash Wednesday in Mexico: the delivery will be in bags and they will accompany the families digitally