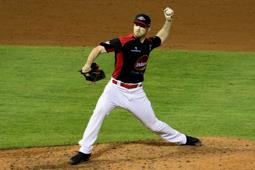 The pitching of Casey Harman and the timely hitting of the Leones del Escogido offense led the scarlet team to beat the Eastern Stars 4-2 on Friday night, in a match held last night at the Quisqueya Juan Marichal stadium, corresponding to the winter baseball tournament dedicated to Don José Manuel Fernández, in memorian.

The victory went to Radke (1-0), who did not tolerate liberties in his performance.

The loss went to Evan MacLane (0-1), who only completed a two-run, four-undisputed episode. The save went to Steven Wilson (2), who allowed a lap.

With this result the Lions place their mark at 3-2, and the Stars are 1-2.

The Lions scored two lines in the first inning that Otto López started by hitting base for third. Another Wander Franco infield-hit to shortstop put runners on first and second. An Edwin Espinal single to left field pushed Lopez and moved Franco to second from where he scored on a Melky Mesa single to left field.

The Lions again scored one more in the second inning, in which Lopez hit uncogchable to right field, and then ripped off the second to later step on the rubber with a hit from Franco to left field.

A solo homer by Junior Lake off Harman down the left field in the fourth inning was the first round the Orientales made.

In the sixth, the Chosen One entered one more in the legs of Julio Y. Rodríguez, who after stealing the middle, scored with Tres Barrera unstoppable to the center.

In the ninth, Francisco Mejía, of the Stars hit a home run down the right field against Wilson to make the game 4-2.