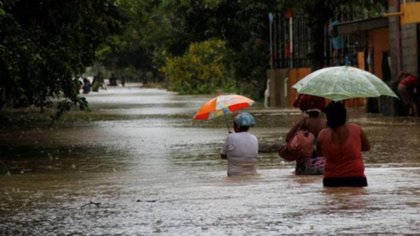 This Saturday, the lota storm affects hundreds of Cartagena, whose water is already up to their waist. The Situation Room of the Office of Attention and Risk Management reported that areas such as Villa Rosa, Olaya Herrera (Zarabanda), Pasacaballos (Mother Herlinda), the Olaya neighborhood and its Central sectors, Colombia, Concepción, Miramar, Tequendama and Socorro streets, as well as in Bayunca (Reino de Pambelé sector), Policarpa and Bernardo Jaramillo present flood emergencies.

Through social networks, citizens report the situation around their homes, hundreds of videos and images show the current situation in the areas of the city.

The Institute of Hydrology, Meteorology and Environmental Studies (Ideam) reported, this Wednesday, November 11, that the tropical wave that approaches the country from the eastern Caribbean Sea has an 80% probability of reaching the category of tropical cyclone and could affect the archipelago of San Andrés, Providencia and Santa Catalina.

In the same way, Ideam reported that in light of the heavy rains caused by the Lota storm, they are accompanied by electrical activity in sectors of the Sucre, Bolívar, Atlántico, Magdalena and La Guajira coastlines. In addition, the Institute also warned that this storm has a high probability of becoming a major hurricane.

Read More: VIDEO: Transportation in kayaks and overflows: what the rainy season leaves in Colombia

Mayor William Dau reported in the morning that “70% of the city is flooded and all the attention organizations are attentive ”. I affirm that a calamity will be reported for the rains in the city and they are waiting for help from private companies to get equipment to help deal with the emergency.

Mayor William Dau Chamat is at the forefront of attention to emergencies caused by tropical storm IOTA.

From @OAGRDCartagena, in coordination with relief agencies, we advance a sweep to establish the magnitude of the damage caused. pic.twitter.com/xxxRpgNMnt

Rubén Torres, a user of the social network Twitter showed through a video how some parking lots in a residential area in the city look:

Cartagena flooded before the storm lota

The General Maritime Directorate, through the Caribbean Oceanographic and Hydrographic Research Center (CIOH), the climatic phenomenon generates sustained winds of 65 kilometers per hour and moves slowly towards the west-southwest, at a speed of 6 km / h.

From morning hours, heavy rains flooded the Historic Center of the city, this is what the interior of the Church of the Third Order looks like: 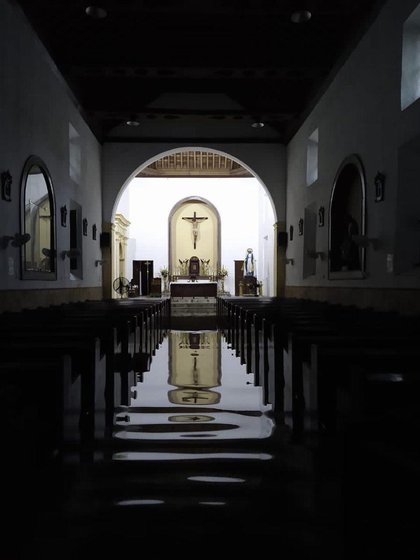 Through another video published on social networks, citizens show how when leaving their houses the water reaches their waist, although the authorities recommend avoiding risking going out, since a stream of water implies dangers for those who pass by.

In this video published by another Twitter user you can see how a stream of water advances with force through the streets of a neighborhood in Cartagena.

The whole week will be plagued with heavy rainfall, especially on the upcoming holiday bridge, from November 14 to 16. According to the Ideam statement, this eventuality will have to be handled with care in areas with high slopes due to the risk of landslides. Ideam alerts, especially, to the departments of La Guajira, northern Cesar, Magdalena, Bolívar, Atlántico, Córdoba, Sucre, Antioquia, Norte de Santander, Santander, Boyacá, Cundiamarca, western Arauca, Casanare, Meta, Chocó, Risaralda , Caldas, Quindío and Valle del Cauca.

At the beginning of November, it was estimated that around 8,000 people were affected by the Eta crossing in Colombia. However, winter in the country did not stop there, since in several areas of the country there are floods, overflows, infrastructure damage and even left people opting for small boats to transport themselves.

The authorities have recalled the emergency lines to which Cartagena can go:

🚒 These are the lines enabled in the fire stations of Cartagena.

⚠️Please make responsible use of the lines in order to promote quick reaction. pic.twitter.com/qF6EVmWkEM

They also recommend Cartagena to stay in safe places, do not risk in open areas, trees or metal areas, as they could be areas of electric shocks. As well as always having your identity document at hand and not entering the water currents “no matter how peaceful they may seem”.

According to the Ideam report, Iota would formally reach the hurricane category between the morning and afternoon of Sunday, November 15, and according to the institution, the alert for tropical storm season would be maintained throughout the remainder of November.

The stone corralito; the Cartagena that everyone wants; the one that fulfills the dream of knowing the sea 🌊 for many; The tourist jewel of Colombia 🇨🇴, is almost disappearing from the map.

This is how tropical storm Iota will feel in Colombia, which this Sunday would become a hurricane