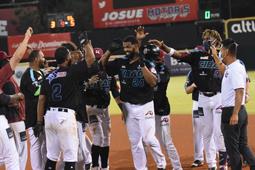 Cibaeñas, in a match held at the Julián Javier stadium, in the continuation of the Dominican professional baseball tournament dedicated in memoriam to José Manuel Fernández.

Peguero broke an 8-run tie that was maintained from the ninth inning with the hit that defined the exciting game held at the Julián Javier stadium in this city.

The inning began with Abiatal Avelino in second, Juan Francisco was intentionally transferred, Webster Rivas played perfect on the mound filling the bags and Peguero drove in the race that finally gave him the victory.

The victory went to reliever Yerry de los Santos, who entered the 12th inning, retiring all three batters by way of the ball, while the loss went to right-hander José Adames. Las Aguilas opening the scoring in the first inning with a solo homer through Victor Robles’ left-field fence.

The Giants riposted with two touchdowns at the end of the first inning with a double to the left of José Siri, Ronald Guzmán and Abiatal Avelino negotiated back-to-back walks and Juan Francisco hit the center-back uncool, pulling Siri and Avelino.

In the second inning the Giants scored two runs after one out receiving transfer José Siri who cheated the second, Ronald Guzmán reached base on an error by the pitcher on the first shot scoring Siri and advanced to third Guzmán who scored by wild pitch.

The eagles approached in the third inning with two touchdowns, Edmundo Sosa hit a double to the right field, Víctor Robles fell down the track 6-3, John Nogowiski delivered the second out with a fly to center, Juan Lagares drove in Sosa with an incogible to center , Rangel Ravelo received a transfer, and Melky Cabrera drove Lagares with a single

The Giants went up at the end of the fifth inning scoring two laps after one out, Carlos Peguero and Richard Ureña hit hits back-to-back to the rigth, pinch-hitter Stephen Cardullo was hit filling the pads, Oneil Cruz drove in

Peguero with a single to center, and Jose Siri spliced ​​incogible to left driving Ureña.

In the seventh, the Eagles scored a return hitting Edmundo Sosa, Victor Robles reached with a perfect touch at first and John Nogowiski singled to center, scoring Sosa.

At the end of the seventh inning, the Giants scored a run after a one-out Oneil Cruz hit to left, José Siri followed with another hit to left field, Ronald Guzmán struck out and Abiatal Avelino drove in Cruz with a single to center.

In the eighth inning, the eagles went up 8-7 making three laps with consecutive hits Ronny Rodríguez, Wilmer Difó and Deivy Grullón, Edmundo Sosa struck out, Víctor Robles drove in Rodríguez with a hit on the mound that pitcher Carlos Ramírez couldn’t handle , Nogowski drove Difo and Grullón with shrapnel to left.

The Giants tied in the ninth, scoring a run after two out, Gilberto Celestino hitting center, Ronald Guzman walked and Abiatal Avelino drove in Celestino with a single to left.

Cabrera and Ronny Rodriguez a wireless.