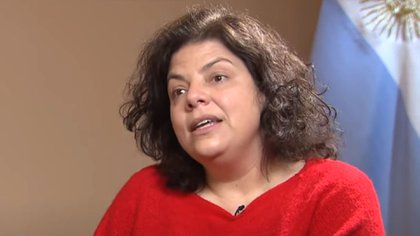 Carla Vizzotti, the new Minister of Health of the Nation

The brand new Minister of Health of the Nation, Carla Vizzotti, who took office this Saturday afternoon after Ginés González García submitted his resignation at the request of President Alberto Fernández, minimized the controversy that was generated around the vip vaccination set up within the health portfolio and pondered the progress of the national vaccination plan.

“In no way does a vip vaccination program work in the ministry, this was a specific situation, which was exceptional and disapproved that it triggered that situation”, He pointed out when clarifying that it was a “small group of people” who received the Sptunik V for their friendship with González García despite not having priority in the official schedule.

Although the issue came to light after the journalist Horacio Verbitsky revealed that Ginés’ private secretary had called him to go to the Ministry to get vaccinated because a team of professionals from the Posadas Hospital was going to go, before this fact was known in particular There were several leaders, from the highest ranking to those at the municipal level, who had already been immunized against the coronavirus.

This is how figures like the president Alberto Fernandez, the vice president, Cristina Kirchner, the governor of the province of Buenos Aires, Axel Kicillof, Own Ginés García, different governors and mayors received Sputnik V before the groups considered at risk.

Faced with this situation, Vizzotti explained that “There were front-line politicians who were vaccinated to build trust.” But then he clarified that as the delivery of the doses by the Russian Federation began to be delayed, the government opened the discussion about “if we continue to vaccinate strategic officials”, so it was decided to resume the initiative “when there would be a stock of vaccines so as not to consider it a privilege ”.

“The discussion is when and why to vaccinate politicians. That they have been vaccinated can be seen as generating confidence in people to get vaccinated, you can take it a simple fact. At this point, the discussion is when is the best time not to generate what is being generated “, he sentenced, alluding to the general rejection that the so-called” vaccinate “caused in society.

With the inauguration of Vizzotti, the Government will seek to minimize political damage of a scandal whose consequences are still unforeseeable and which caused criticism not only from the opposition, but also from within the Frente de Todos. For now, the main plan is to give all the possible support to the new minister in her landing with the new role in the health portfolio and to recover the legitimacy of the vaccination plan.

In that sense, the Minister was blunt. “I do not think that confidence in vaccination has been lost. Confidence should not be impacted ”, indicated when interviewed on Radio 10.

During the report, the official made it clear that the priority of her mandate will be to undertake public policies aimed at “reinforcing the transparency” of the vaccination plan. “This is something to discuss and I discussed it with the Chief of Staff. We are going to meet tomorrow to present you with a monitoring plan to make vaccination transparent, ”said Vizzotti.