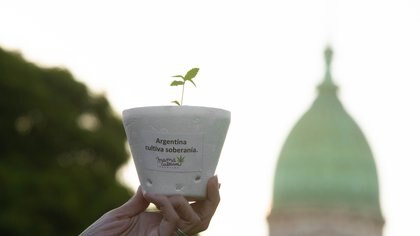 Almost four exact months have passed since that noon on July 15 when the Minister of Health Ginés González García and his vice Carla Vizotti presented the new regulation of the law of medicinal use of cannabis to references of science and activism. Finally, the Government confirmed the regulation of domestic cultivation and the sale in pharmacies of oils and creams produced with this plant whose human use dates back 10,000 years.

The news was published at 00:00 this Wednesday in the Official Gazette with the signature of the President of the Nation, Alberto Fernández, whose government had just promised to review Law 27,350, passed in March 2017 and highly criticized by the community of users, doctors, activists, growers and businessmen interested in the growing business of legal marijuana, an industry in expansion throughout the world.

It is news that changes the paradigm and the local scene, after years of global and total prohibition. The most important novelty contained in this new regulation is, undoubtedly, the improvement of article 8 of the law, which includes authorization of personal and network cultivation for users, researchers and patients who register for the National Cannabis Program (REPROCANN). In this way, both people at home and cannabis organizations – the basis of this fight that has been going on for more than a decade and does not end in medicinals – and universities will be able to cultivate as long as the purpose is therapeutic.

“REPROCANN will register, in order to issue the corresponding authorization, the patients who access through the controlled cultivation to the Cannabis plant and its derivatives, as medicinal, therapeutic and / or palliative treatment of pain. Patients may register to obtain the cultivation authorization for themselves, through a family member, a third person or a civil organization authorized by the Enforcement Authority. Whoever has a medical indication and has signed the corresponding informed consent, under the conditions established by the PROGRAM, “says the new letter of the law, which also indicates that the provinces may regulate these registries and issue authorizations for its citizens.

The limits on the number of plants allowed in each home or in the headquarters of the organizations for “network” crops will be known later, when the Ministry of Health drafts the particular resolutions. In any case, the concern of the REPROCANN authorities and the sanitary portfolio is placed not so much on the quantity but on the quality of what these crops produce. It is discounted that the ministerial resolutions leave a limiting framework in proportion to its two “star” molecules: THC, which contributes psychoactivity and that is why many countries do not allow it for medical use, and CBD, or cannabidiol, a word that according to meters Internet search rankings highest in recent years.

“The idea is to control the final product”warned one of the responsible officials. At this point the draft also clarifies that it will be contemplated “The protection of confidentiality of personal data” growers.

With the new regulation presented by the national Executive Power this Wednesday all solidarity growers, families and groups will be able to enter the legality circuit that, without responses from the State, despite the law and at the risk of going to prison, they sustain with great difficulty the demand of users, whose growth has been exponential in the last three years (especially older adults).

“The role of organizations will continue to be key”, Vizzotti warned in July. The vice minister worked since February with the members of the honorary Advisory Council.

Until now, the possession of seeds and plants even in the private sphere and for personal or therapeutic consumption, He was punished by the drug law (23,737) with up to 15 years in prison. At least medicinally, this regulation means the beginning of the end of an era where the norm was to criminalize solidarity patients and cultivators.

The 2020 model regulation enables not only to import medicinal cannabis products, which was already allowed, although only for refractory epilepsies and via ANMAT with a cumbersome procedure, but also from the sale in pharmacies authorized to sell and produce “magisterial formulations”, such as oils, tinctures or creams. In other words, whoever does not want to, is not interested in or cannot grow at home, will be able to get it without difficulties. Until now, the majority of users who do not access the solidarity grower consume on the black market, without control of the quality of the substance.

In addition, the new norm will cut the limit imposed by the government model of Mauricio Macri regarding the pathologies authorized for treatment. As of the publication of the new regulations not only will patients with refractory epilepsies have permission but also the rest, whatever it gets positive effects.

The State will guarantee the free provision for whom it is do not have social work or private health coverage, and those enrolled in specific programs of public organizations, something that was currently happening but with little success, as it was exclusively for refractory epilepsy and as it did not have promotion or public campaigns. The previous government barely managed to get fewer than 300 patients to sign up for “investigational” treatment. In fact, last year the State, after reducing the Ministry of Health to a Secretariat, reduced the budget for the National Cannabis Program, to which it allocated less than 1,000 pesos per day.

The new regulations include the public promotion of university extension programs related to medicinal cannabis, the testing of substances and experimental crops to strengthen research and access. It is also established that Health may articulate actions and sign agreements with academic-scientific institutions, public and private organizations and non-governmental organizations.

“The National State will provide technical collaboration to promote the public production of cannabis in all its varieties and its eventual industrialization for its medicinal, therapeutic and research use in the Public Production of Medicines laboratories. The product will be dispensed through the National Bank of Oncological Drugs and / or in the pharmacies authorized by the Program”, Says the regulation. It is known that, in addition to the production of the province of Jujuy, which began two years ago, there are several provinces – including the Federal Capital – that began to advance local bills for their public laboratories.

The Ministry led by González García will be responsible for guaranteeing the necessary inputs to facilitate medical and / or scientific research on the cannabis plant and “will promote and prioritize, in view of efficiency in the use of resources, regional production and that carried out through the public laboratories nucleated in the National Agency of Public Laboratories (ANLAP) .In this sense, the Government takes away the exclusivity of INTA and Conicet and, something that had been claimed from a sector of the Advisory Council, opens the game to universities throughout the country that until now were essentially the ones who sustained access networks through joint work with cannabis organizations non profit.

With this new regulation, a new reality opens up that puts the country facing a future where the cannabis plant will be integrated into the productive circuit and international trade, both to import products and to export. Argentina is a country that, due to its climate and soil, has enormous potential in a business that in the United States and Canada offers governments millions of dollars in taxes and creates thousands of jobs. Not only do activists, users and investors celebrate. Cannabis regulation is a safe step also in the fight against drug trafficking and clandestine trade.

The path of legal medicinal use does not stop with this regulation signed by Alberto Fernández. Days ago, the deputy from Entre Ríos Carolina Gaillard, from the Frente de Todos, presented with the support of a dozen pro-government legislators and the opposition a bill to replace this 27,350, a more comprehensive regulation than this new regulation that also provides for regulation of the trade in cannabis-based therapeutic products. Government sources confided to .: “It is likely that next year it will be discussed, it has the endorsement of the highest.”