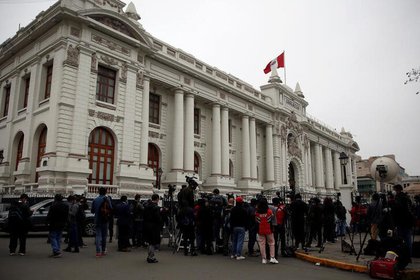 LIMA, Feb 22 (.) – Peru’s presidential candidate who is second in the polls, Yohny Lescano, said on Monday that he seeks to “de-globalize” the country by strengthening local production and that he will enforce the exploitation of natural resources with “equitable prices. “.

Lescano, in a conference with the foreign press, also affirmed that in a possible government of his he will draw up a new cadastre to define where mining can be done and he was against the development of the millionaire Tía María copper project, stopped for a decade by a social conflict.

The representative of the Popular Action party, founded more than six decades ago, pointed out that his proposal does not have an ideological base of the left or the right and that it is in favor of investment, but without abuse or dominance by “economic groups.”

“We are not going to nationalize any company, nor are we going to promote economies in that sense. What we will promote is the social market economy, that the economy is at the service of the people, not the other way around,” said the 62-year-old presidential candidate. for the general elections of April 11.

Lescano, a lawyer and former legislator for nearly 20 years, emerged in February to second place in polls after nearly doubling his support to 10%, behind former soccer goalkeeper George Forsyth who ranks first with 11%, according to Ipsos Peru.

Two other polling firms, Datum Internacional and CPI, also rank Lescano in second place. But a large majority of Peruvians still do not know who to vote for or say they will not support any, so it is foreseen that the presidency will be defined in a second electoral round on June 6.

The presidential candidate said that “de-globalizing” the economy implies not depending on the twenty free trade agreements that Peru has, which could be evaluated to see if there is a lack of “equity” and sit down to talk. “If an agreement is not reached, we will see what measures to take, within the parameters of dialogue and exchange of positions,” he said.

Regarding natural resources in Peru, the world’s second largest copper producer, Lescano said that the exploitation of the resource does not make a company an owner. “The services are recognized, the goods are transferred to it, but always Peru as the owner, that must be modified.”

“That’s why they give ridiculous prices,” he said. “I think this is a very important part of being able to start collecting more, to get better equitable income, just for Peru, that does not mean that it will be nationalized, far from it,” he said.

Lescano said that he will review the project to modernize the Talara refinery, owned by the state-owned Petroperú, -for 5,000 million dollars- because “unfortunately it is not giving the corresponding revenues.” He also said the $ 1.4 billion Tía María mining project cannot go ahead.

“I plan to do a cadastre to see where mining is done and where not, but formalizing or wanting to put pressure on the case of Tía MarÍa would be a reckless action and would cause more problems than benefits. We are not willing to insist on this,” said the candidate in reference to the Southern Copper project.

Meanwhile, the politician agreed on the development of a world-class lithium project located in Puno, his homeland, but under a law that transforms the resource into added value in Peru and makes batteries. “It can be through a private company, of course, but it can also be a partner of Peru.”

Lescano also said that he is in favor of creating “a flag carrier” or state airline and that he will promote greater action by the State where private business activity does not reach, to provide a better service in remote areas of the country.