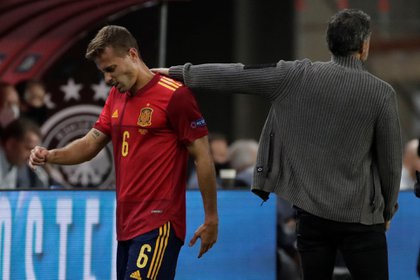 The Spanish player Sergio Canales receives the greeting of the coach Luis Enrique Martínez after retiring injured during the match of the sixth day of group 4 of the first phase of the Nations League that the Spanish and German teams played. . / Julio Muñoz / Archive

Seville, Nov 18 . .- The muscle injury suffered this Tuesday by midfielder Sergio Canales in Spain’s victory against Germany (6-0) has increased the efforts of Betis coach, Chilean Manuel Pellegrini, for the match of the next Monday against Athletic Bilbao, for which he will not be able to count on Frenchman Nabil Fekir either.
Canales withdrew in the tenth minute of the La Cartuja game with a fibrillar tear in his left femoral biceps and, although this Wednesday he posted an image on his social networks inside a hyperbaric chamber with the message ‘recovering from now on’, his contest for San Mamés seems almost impossible due to the recovery time from this type of injury.
In the absence of a definitive diagnosis from the club’s medical services, Pellegrini will not be able to count on the most decisive player in his squad in Bilbao, since he has played everything so far, with 774 minutes added in the nine games played, in which he has scored a goal and has become the league’s top assistant with four passes.
Pellegrini, who this Wednesday has continued the preparation of the match against Athletic in the Veriblanca sports city, also has the serious setback of not being able to count on the Frenchman Nabil Fekir, who is also recovering from an injury to his left hamstring that occurred in the last training session before the clash against Barcelona.
In addition, the Chilean coach, waiting for the rest of his internationals to return, has a safe withdrawal due to sanction of another of his props, the Algerian central Aïssa Mandi, who was expelled at the Nou Camp, although in return he could recover the Mexican Andrés Guardado and striker Juanmi Jiménez.
Both players are already exercising with the group and the Chilean will hurry until the call is given to know if they are in the optimal physical point to enter among the chosen ones and, where appropriate, play at the start or have minutes in Bilbao, especially the Mexican for the losses in the midfield of Canales and Fekir.
Guarded has been in the concentration of Mexico in Austrian lands despite being convalescent of some muscular problems that have had him outside the last games and, although he did not play, he did exercise with his teammates before returning to Spain and starting yesterday at Pellegrini’s orders.
The Chilean coach will have to check the status in which the rest of his internationals arrive: the Portuguese William Carvalho, the Argentine Guido Rodríguez, the Mexican Diego Lainez, the Brazilian Emerson Royal, the Chilean Claudio Bravo and the Paraguayan Tonny Sanabria.
The Algerian Mandi is already in Seville, who must pass the mandatory medical controls before joining the group.