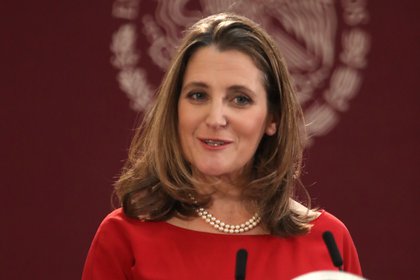 Toronto (Canada), Nov 30 . .- The Canadian government announced this Monday that it is developing a plan of up to 100 billion Canadian dollars (about 76 billion US dollars) to reactivate its economy, deteriorated by the pandemic.
Canadian Deputy Prime Minister Chrystia Freeland announced the plans in the Canadian Lower House of Parliament, noting that the fiscal deficit is expected to reach $ 381.6 billion ($ 290.016 billion) this year, although she did not rule out that if the pandemic continues to worsen amounts to about 400 billion Canadian dollars (304 billion US dollars).
Freeland said that the details of the three-year stimulus plan will be announced in the coming months and that it will depend on how the pandemic evolves in the coming weeks.
The plan presented this Monday indicates that Ottawa anticipates spending between 3 and 4% of the Gross Domestic Product (GDP) to reactivate the economy.
In July this year, the then Minister of Finance of Canada, Bill Morneau, predicted that the country’s fiscal deficit would stand at 343.2 billion Canadian dollars (260.832 million US dollars) due to the measures adopted to respond to the crisis caused by the covid-19 pandemic and falling income.
Canada has allocated hundreds of billions of dollars in programs to provide financial relief to the private sector and individuals in the face of the successive lockdowns that the authorities have decreed since the spring to reduce the spread of the coronavirus.
Before the pandemic, the Canadian government had predicted that for fiscal year 2019-2020 the deficit would stand at $ 19.6 billion ($ 14.896 billion), a figure then considered high.
Freeland on Monday justified the government’s fiscal plans by noting that this is the most serious challenge the country has faced since World War II: “It is the most serious economic shock since the Great Depression and the worst health crisis since the Great Flu of a century ago, “he said.
“Canadians should know that the federal government will be there to help them get through it,” added Freeland.
The Deputy Prime Minister added: “We are going to spend the winter working with Canadians towards the 2021 budgets to plan and prepare our investments for when the virus is under control. At that point, we will be ready to accelerate.”