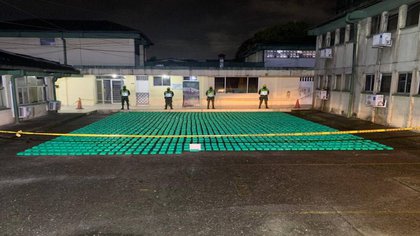 Seizure of cocaine camouflaged in avocados for export / (El País).

On the afternoon of Thursday, November 19, the Valle del Cauca anti-narcotics police discovered a ton and a half of cocaine camouflaged in boxes of export avocados, which had as their place of origin the port of the municipality of Buenaventura.

As reported by the Attorney General’s Office, the merchandise was destined for the port of Antwerp in Belgium. A guarantee control judge legalized the seizure of 1,572 kilograms in the docks of the Valle del Cauca municipality and thus the accusing body began an investigation to establish which criminal organization the alkaloid found would belong to.

Total 1,572 green rectangular packages they were taken from a container with a shipment of avocados that would end up being exported to the Netherlands. For this raid, the Anti-Narcotics Police Unit would impute the crimes of trafficking, manufacture and possession of narcotics to those responsible.

With the raid, the authorities have prevented what would be the distribution and marketing of 5 million doses on the streets of Spain, the Netherlands and Germany. According to the Valle del Cauca Police, This drug shipment would be worth approximately $ 69 million on the illegal European market.

According to the anti-narcotics authorities of the National Police, thanks to the investigative and complaint work carried out by the civic participation network, the location of a cargo contaminated with the alkaloid that was going to leave one of the most important maritime ports was known. from Colombia.

On video, the inspection and seizure of the cargo bound for northwestern Europe was recorded by the Police:

A shipment of avocados bound for Belgium was hiding a ton and a half of cocaine / (Canal Guacari).

During the last month, this is the third large shipment of cocaine seized for export, after the one found on November 11 in the ports of Barranquilla and Santa Marta, where criminals tried to export the drug to Syria and Belgium, respectively, between coffee and fruit.

Another recent case of cocaine export to Belgium occurred on October 6, with the seizure of 1,604 kilograms of drug that was hidden in three containers of organic sugar, also from Buenaventura. During 2020, port controls in Buenaventura have left a total balance of 9 tons of cocaine seized by the authorities prior to export.

The owner of the $ 8,744 million narcocaleta asked to be paid with tequila and mezcal