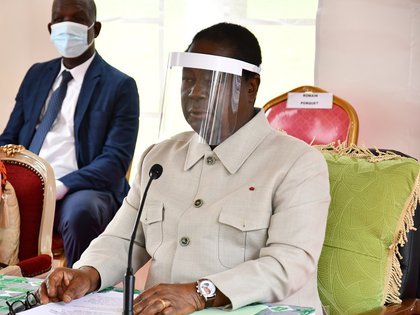 Former Ivory Coast President Henri Konan Bédié, one of the country’s main opposition leaders, has announced his decision to postpone the meeting scheduled for Friday with other opposition parties to address the crisis that the country is going through after the presidential elections of 31 of October.

Konan Bédié has communicated to the leaders of all opposition organizations that “the work session initially scheduled for Friday, November 20, 2020 at his residence has been postponed to a later date,” without giving further details, as reported by the portal news Koaci.

The statement was published two days after the Ivorian president, Alassane Ouattara, stressed his willingness to maintain a dialogue with the two main opposition parties in the country to try to bring positions closer to the crisis caused by his decision to run for a third term. something that he achieved at the polls amid the opposition boycott.

The two main opposition candidates, the Democratic Party of Ivory Coast (PDCI) of Konan Bédié and the Ivorian Popular Front (FPI) of former Prime Minister Pascal Affi N’Guessan, called for civil disobedicience and boycott to denounce that Ouattara’s candidacy was illegal, according to the Constitution, and criticized the elimination of other important opponents from the electoral race.

As part of the authorities’ efforts to defuse tensions, Ouattara last week began contacts with Konan Bédié, while Prime Minister Hamed Bakayoko met with politicians close to former President Laurent Gbagbo, whom the authorities have also handed over the passport so that you can return to the country.

Gbagbo asked the Government to deliver a passport to be able to return to the country before the elections, after being acquitted in 2019 by the International Criminal Court (ICC) of a series of crimes that include murder, rape, persecution and other inhuman acts, all they relate to the escalation of violence that was unleashed after the 2010 elections and that left some 3,000 dead.

Tensions in the country have left around 85 dead so far, according to the latest official balance and many Ivorians fear that another electoral controversy could lead to a new wave of violence like the one that shook the country between 2010 and 2011, when Gbagbo was he refused to acknowledge Ouattara’s victory at the polls.