Although we cannot say that it is a complete copy, it is clear that BYD’s new electric minivan has certain features clearly borrowed from some Volkswagen models and the Tesla Model 3. Despite this, the new BYD D1 is an MPV very attractive.

The Chinese giant BYD has presented a new electric minivan intended for ride hailing services, the new BYD D1. This is the result of a project that the manufacturer has carried out in collaboration with Didi chuxiang, one of the largest providers of private transport services through app or ride hailing in China, so the model will be the basis of a new fleet of this company.

This means that the new BYD D1 will not be available to the rest of the public and therefore will not reach BYD dealers. Which is a shame, because the truth is that it is a model with a very attractive design and a notable technological load, despite having been specifically designed as a fleet vehicle. Although no less curious are the sources of inspiration that the designers of the Chinese brand seem to have used, since the BYD D1 appears to be the sum of several features and elements from other designs and models, but not their own, but from other manufacturers. 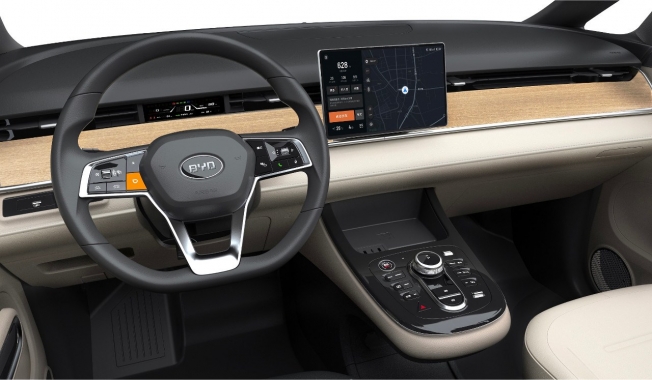 Its dashboard is clearly inspired by the Tesla Model 3.

On the outside, the model features the traditional minivan silhouette, with a very sharp nose whose features remind us in part of Chrysler’s MPVs, but also of some Volkswagen designs and not only of recent models. Both the main features and the various exterior accessories, such as the side moldings, have many points in common with the design language used by Volkswagen in its electric ID range, including rims that are extremely similar to those available in the Volkswagen ID.3 range. Although the truth is that the front of the BYD D1 also reminds us of the Volkswagen Futura, a concept that the German brand presented in 1989 and whose optics and grill are similar to those of the Chinese model.

Although the similarities do not end here, because inside we also have an interesting mix of features and elements from various companies. Explanations are less necessary here, since it is obvious that the dashboard is a blatant copy of the one used by the Tesla Model 3, although curiously it has some controls, such as the steering wheel itself, with a design very similar to that used by Volkswagen ID.

The BYD D1 is a compact sized 5-seater minivan, at 4,390mm it is somewhat shorter than some compact 7-seater minivans that we could find before on the market, such as the Toyota Verso. This has a single 138 hp (136 hp) electric motor and a battery pack that allows you to travel up to 418 km with a single charge, although this measure is approved according to the optimistic NEDC approval cycle.

When brands copy others to hide their own modelsRead news