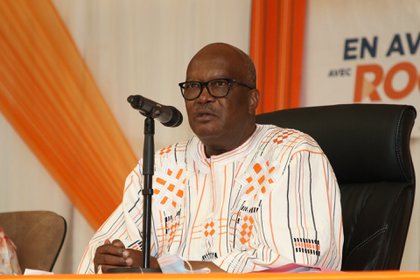 The electoral colleges of Burkina Faso have already opened their doors to elect the president and Parliament in a scenario of growing insecurity that will in fact prevent many of its citizens from participating in elections in which the current president, Roch Marc Christian Kaboré, part as a favorite but that could be complicated if a second round is necessary.

The situation is much more complicated than it was when Kaboré came to power in the elections that followed the revolt and the coup that forced the departure of Blaise Compaoré in October 2014, after 27 years at the helm of the country.

Burkina Faso had not been hit by the jihadist violence that did affect other countries in the region, particularly neighboring Mali, a fact that has been attributed to a non-aggression pact by Compaoré with these groups. But that changed shortly after Kaboré came to power. The double attack that occurred in January 2016 in Ouagadougou against a cafeteria and a hotel that left about thirty dead, has followed an endless chain.

The main operations in the country are the affiliates of Al Qaeda and the Islamic State in the region, the Group for the Support of Islam and Muslims (JNIM) and the Islamic State in the Greater Sahara (ISGS). Their actions, in which not only the security forces are the target, have also led to the appearance of self-defense groups, such as the Kogwleogo, to which the Government has added volunteers in the last year to support the Army and the Police.

The result has been incipient violence of an inter-community nature, with killings of members of the Peul ethnic group, who are identified with the jihadists for being the main social group from which they feed, which have been replicated in killings against members of other communities.

As a consequence, the country is immersed in a serious humanitarian crisis, with more than a million displaced people, and there are large areas of the territory outside the power of the State, in which it will not be possible to vote this Sunday. Despite this, the National Assembly approved a reform of the Electoral Code that gives validity to the elections although they will not be held throughout the territory if it is for reasons of force majeure.

“We wanted to be realistic because trying to organize elections throughout the territory is taking risks with the terrorists,” Kaboré said a few weeks ago, expressing his “regret” that some citizens cannot exercise their right to vote, although he assured that only 3 percent of the electorate is in this situation.

On October 31, the starting date of the electoral campaign, the Constitutional Council verified cases of ‘force majeure’ that prevented the holding of the vote in municipalities in six of the thirteen regions of the country, which represents around 18 percent of the national territory. As regards the displaced, they will be able to vote wherever they are, but many have lost the necessary documents in their flight to exercise their right.

In total, thirteen candidates will measure their strength in the presidential elections, with a single woman among all of them. However, who seems to have more chances of victory is Kaboré, although insecurity has taken a toll on his popularity. The challenge for the president is to win in the first round, with more than 50 percent.

If he does not succeed, it could be much more complicated, since a good part of the opposition has sealed an agreement by which they promise to support the candidate who manages to go to the second round with the current president. Among the twelve rivals who aspire to unseat Kaboré, who has made continuity in his management his main asset, there are two who start with more options.

The first of them is the current leader of the opposition, Zephirin Diabré, candidate of the Union for Progress and Change (UPC). The 61-year-old former Minister of Finance, who has also worked for the UN and the multinational AREVA, among others, was already second in 2015 and is presented as the candidate for change, promising to reform agriculture and education, as well as investments in employment and infrastructures.

The opposition leader has not closed the door to dialogue with terrorist groups. In an interview with radio station RFI this week, he was in favor of “identifying among those who attack us men and women with whom a dialogue can be established”, highlighting that “not all groups have the same demands” and some of those that are “manageable”, such as the development of certain areas.

Furthermore, it has promised to form “a government of national reconciliation in which all the major components of our political life will be present,” both the Movement for the Progress of the People (MPP) of Kaboré and the party of Compaoré, because “each one can contribute something. ” In the case of the former president, who has offered to help in the fight against terrorist groups, Diabré has argued that it need not be ashamed to go to him as he has contacts that can be useful.

CANDIDATE OF THE COMPAORÉ PARTY

Eddie Komboigo, current leader of the Congress for Democracy and Progress (CDP), Compaoré’s party, which was prevented from participating in the previous elections, also leaves a priori with options. In his opinion, the party still has the support of Burkina Faso and sees it likely that given Kaboré’s administration it will benefit from a “vote of sanction.”

His priorities are “peace, reconciliation and social cohesion” without neglecting economic recovery, while in terms of insecurity, he leaves the door open to dialogue with the jihadists. “Nowhere has terrorism been defeated only by military means,” he recently highlighted in an interview with ‘Jeune Afrique’.

“We must work to know those who attack and mourn Burkina and we must understand what pushes them to act like this, to better combat them,” he said, stressing that “that is what the president should do.”

According to Komboigo, “to combat terrorism, special units must be formed, better equip the defense and security forces, and to this end build a truly dissuasive Army” but “without forgetting to invest massively in the affected regions.”

Faced with the more flexible position of his two main rivals – others also do not rule out dialogue – the president remains resounding in his rejection. “We will not negotiate with those whose project is to dismantle Burkina Faso and put our coexistence in trouble,” he said a few days ago at a campaign event.

In the last hours, Diabré has denounced specific cases of electoral fraud. Thus, they assure that voter cards have been bought with money: “There are people who are dedicated to collecting voter cards for money. The massive nature of the phenomenon can undermine serenity and the integrity of the results of November 22, 2020 “, said Diabré.

He has also assured that they know of students who claim to have voted in advance in exchange for money. “Illiterate women say that is what they were told to do,” he pointed out, according to the Burkina24 news portal.

Diabré has referred to the modification of the polling stations and the closure of polling stations in areas with greater affinity with the opposition, while voting centers do operate in areas considered loyal to the current president Kaboré.

“If we win the elections, we will not allow the majority to steal our victory from us,” declared Diabré, who insisted that Kaboré cannot “even dream” of winning the elections in the first round.