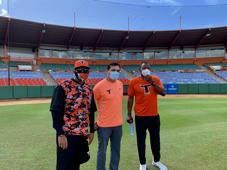 For the Bulls of the East the primary objective for this season has always been one: to stay healthy, instead of the mission of defending the crown of national and Caribbean champion.
“Our goal from day one has been to create awareness among coaches and players of the importance of staying healthy and therefore, in the background, is to remain competitive on the field of play,” said Raymond Abreu, general manager of the Toros from the east.
The Bulls were subjected to COVID-19 tests this Friday and none of their players, coaches, operations staff and essential personnel tested positive for the virus.
“The players are making a great effort, almost all of them are confined to La Romana and, although we know we are fighting with a dangerous enemy, we are confident that if we continue to do things well we will be able to move forward,” said the bullfighting executive.
After the postponements of both weekend games against the Giants, the Bulls will face the Eastern Stars this Sunday where they will conclude the game that remained in the eighth episode last Tuesday.
That resumption will be held at 2:00 PM at the Francisco Micheli Stadium with the greens as homeclub, using the same rosters from that day, and one hour after the end of the match the match that was postponed on Opening Day with the Bulls will be played. as homeowners.
Right-hander Domingo Germán will be the starting pitcher this Sunday against the Greens.