Microsoft continues to prepare for the launch of Sun Valley, the major redesign of Windows 10 that the company is working on. This time he does thrown out the Build 21292 for the Dev channel in which the recent addition of the News and Interests section of the taskbar is improved.

Improvements in news and interests in the taskbar.

They continue to improve the experience and this week they introduce some fixes:

With news and interests on the Windows taskbar, you not only get quick access to the latest headlines and weather, but you also get real-time traffic conditions and alerts that update throughout the day. If you click on the traffic card, you will see details about traffic alerts, traffic cameras, and traffic times between nearby cities with a more extensive map experience. 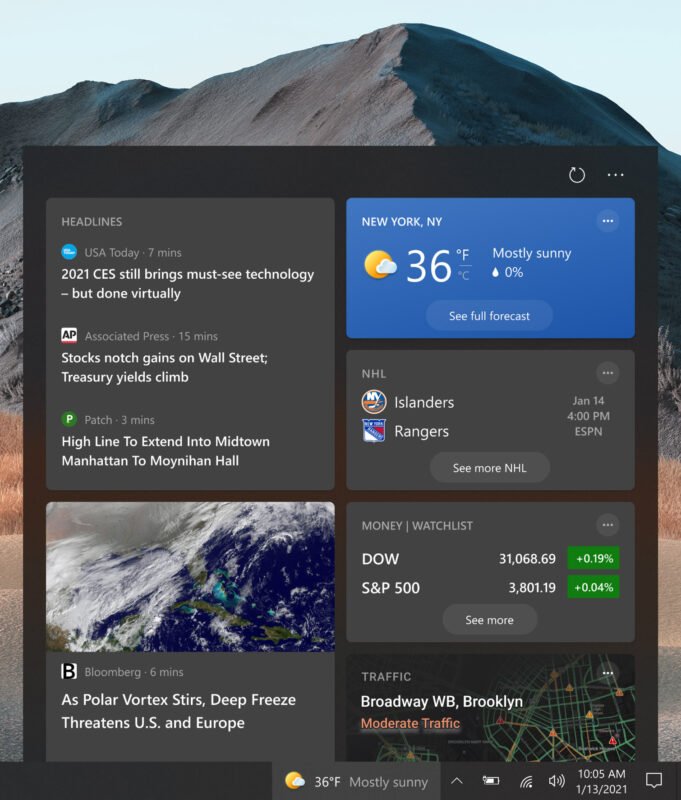 Current weather conditions are displayed directly on the taskbar, so you can stay up-to-date on weather conditions at a glance. The weather information displayed on the taskbar updates throughout the day so you can see an accurate visual representation of the current weather conditions at your location, along with the temperature. You can change the location of the weather you see by clicking the three dots on the Weather card and then clickingEdit location. It’s also easy to click to see the forecast; Just click on the Weather card to view an immersive in-browser weather experience with cutting-edge and accurate forecasts, on interactive animated maps that make it easy to understand the weather, along with timely news on severe weather events. 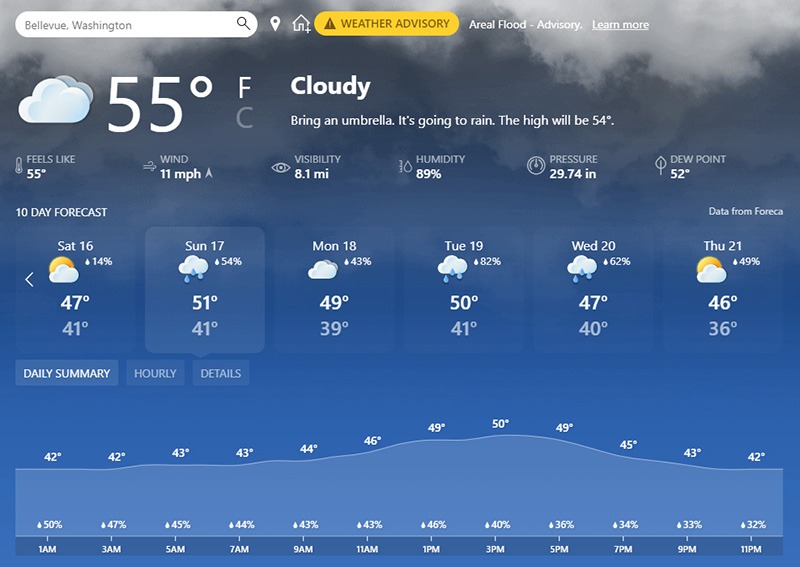 When you click on the Weather card, you will see a full page view of the weather, with details such as current temperature, wind, and humidity level, along with hourly predictions for the day’s temperature and precipitation chances. , so you can plan your day. For those of you who really like to plan ahead, we also show a quick view of the 10-day forecast to help you if, for example, you have some outdoor errands to run next week. Forecasts are based on radar images that are complemented with social, spatial and temporal data processed by deep learning in our neural meteorological model. These forecasts reflect small topographic variations in your specific area so you can get forecasts for your street, not your county, with minute-by-minute predictions.

If you want to dig deeper beyond the weather summary, scroll down to see a rich, interactive map of forecast weather conditions over time in your area, powered by Bing Maps and MSN weather predictions. You can change views and zoom in on your specific location to see animations over time of predicted temperature, precipitation, wind, and more. For US users, the map also provides detailed views of severe weather events such as winter storms, wildfires, and hurricanes.

As a reminder, news and interests are currently available to a subset of Windows Insiders on the Dev Channel at this time. Managing the implementation of features like this allows them to quickly identify issues that can affect performance and reliability.

IMPORTANT NOTE: This feature is currently only available to Windows Insiders in the United States, Canada, Great Britain, Australia, and India. This feature also requires the new Chromium-based Microsoft Edge browser (stable) to be installed on your PC. They are also testing different variations of this experience, so some Insiders may see a different experience than others.

Changes and Improvements Based on feedback, they are updating Settings> System> Sounds to display a message when microphone permissions have been disabled for the entire system or for all applications, with a link to the microphone privacy settings page. Fixes Still working to improve x64 emulation on ARM64 thanks to feedback. This build addresses issues in various apps, including crashes on Zwift, Serif Affinity Photo, and Your Phone, as well as blank pages on Steam. Addresses an issue that resulted in an increase in people seeing a message that said “Critical error: Your menu Startup not working ”on recent builds. Fixed an issue from the last two builds where explorer.exe / Windows shell would hang or crash, particularly after interacting with audio / video. Fixed an issue where NTFS would log false positive tearing events. Fixed an issue that caused Microsoft Teams and other applications to appear unexpectedly as “Program” (instead of the application name) in the Start tab of Task Manager. Fixed an issue in the Unable to sort processes in Task Manager by status, Fixed an issue that could cause notifications to appear tions after WIN + Shift + S shortly after a clean install or reset your PC Fixes an issue from the previous build where when launching Xbox Game Bar from Start or using Windows Key + G when using a text editor, the computer could appear to be unresponsive.Fixes an issue where when using Windows scaled over 100% on recent builds, opening and closing Task View would cause open windows to appear unexpectedly large on transition back to desktop. Fixed an issue where typing “-” on a numeric keypad when using the Japanese IME did not take into account whether the IME was in full-width or half-width mode. Issue where Hanja word conversion with Korean IME was not working in Excel when Korean Language Pack for Office was installed. Known Issues They are working on an issue that Insiders has reported where certain games such as State of Decay 2 or Assassin’s Creed may crash or crash on launch. They are investigating an issue whereby Call of Duty: Modern Warfare and Call of Duty: Black Ops Cold War may not start from this version. If you play these games, you may want to pause updates until the issue is resolved. You may experience some rendering / graphics issues after resizing certain application windows. If you minimize all your application windows and open them again, you should solve the problem (press the Windows key plus D twice). They are investigating an issue where some 32-bit systems may lose network connection after doing this compilation. If you are running a 32-bit version of Windows, you may want to pause updates until the issue is resolved. Miracast users may experience very low frame rates on this build. They are investigating reports about the update process being carried out. hangs for extended periods when trying to install a new version Aero Shake is disabled in this build. To enable it, you will need to go here in the Registry Editor and create a new DWORD entry called DisallowShaking with a value of 0: HKCU Software Microsoft Windows CurrentVersion Explorer Advanced Live previews of pinned sites are not enabled yet for all Insiders, so you may see a gray window when hovering over the thumbnail on the taskbar. We are still working to polish this experience. They are working to enable the new taskbar experience for existing pinned sites. In the meantime, you can unpin the site from the taskbar, remove it from the edge: // apps page, and then pin the site again.[Noticias e intereses] Upgrading to this build will reset the News & Interests taskbar to “Show Icon and Text”. This is fixed in the future.[Noticias e intereses] Sometimes floating news and interests can’t be dismissed with a pen.[Noticias e intereses] News and interests use more space on the taskbar on the left than expected.[Noticias e intereses] The button on the taskbar can display stale information every time the user logs into their Windows session.[Noticias e intereses] The news and interests drop-down menu displays content in a single column before quickly switching to double column.[Noticias e intereses] Taskbar button text may appear pixelated on high-resolution displays.[Noticias e intereses] The context menu of the taskbar and the news and interests overlap.[Noticias e intereses] Under certain circumstances, news and interests use 100% of the CPU when they are first released.[Noticias e intereses] If you try to share content, the drop-down menu is dismissed.[ARM64] Insiders who installed the preview version of the Qualcomm Adreno graphics driver on Surface Pro X may experience reduced screen brightness. This will be addressed in a future update.