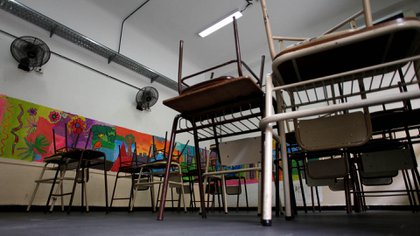 On November 9, the Buenos Aires government distributed a circular that consigned the parties in a position to start with educational activities. There were just over one hundred, which were added to the other 26 districts that had already been enabled to return to face-to-face classes. Almost the entire province of Buenos Aires, where four million students attend, with the endorsement to retake the presence. But so far the opening is only declarative. The vast majority of schools, due to impossibility or lack of will, remain closed.

Just one month after the end of the school year, the opening is optional. On the one hand, some establishments lowered their curtains annually. On the other, the schools that do want to open ran up against a myriad of bureaucratic obstacles. In principle, each institution must present a folder with a file detailing the list of students, the teachers in charge of each group, the types of activities to be carried out, their respective schedules, the declaration of compliance with health protocols, among other points.

So far, nothing out of the ordinary. It happens that attached to that file they also require an arsenal of certificates: certificate of deratization, disinsection, habitability signed by architects, water potability signed by safety and hygiene technicians. Everything updated to date, even though they have already been presented at the beginning of the year.

Last week less than 900 schools – all of them in the interior of the province, with low epidemiological risk – resumed face-to-face classes, only with those boys who lost ties with their teachers during the quarantine. In total, there are more than 15 thousand Buenos Aires establishments. 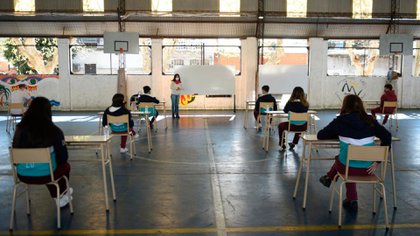 The reengagement activities are in open-air areas that, in general, schools do not have

The districts that show a moderate risk – all the Conurbano included – in theory are enabled to undertake activities of re-linking in the open air. According to official sources, so far they have received 1,385 proposals, between public and private schools, to generate reunions, of which 1,192 proposals have been approved.

However, those numbers contrast with what the schools claim. From the . query it appears that the public schools that were launched are exceptions and the private ones, the vast majority, have not yet received authorization.. They say that it is a “staging” of the Buenos Aires government and the municipalities. A back-to-school announcement that eases incipient pressure on families after eight months of closure, but is postponed with outrageous requirements as the clock ticks and the year ends.

“Bureaucratization has reached such a point that it is practically impossible to open. Very few schools have been approved. In the suburbs they don’t get to 100”, Warned Martín Zurita, head of the Association of Private Schools of the Province of Buenos Aires (AIEPBA).

“We regret that in many districts of the province the return for re-linking activities has been bureaucratized. It depends on the educational region, the district and the assigned inspector how lucky to start or not. Despite complying with all the measures required by the jurisdictional plan, in some districts it seems that they do not want to proceed with the opening requests. We need to regain presence so that we can avoid more definitive school closings ”, he added.

During these hours, those responsible for the schools rush to the occupational health and safety technicians so that, in a matter of days, they sign the certificates to complete the folder. This folder passes through the hands of an inspector, who does nothing more than submit it to the chief inspector of the region. The province is divided into 25 educational regions. Each region has a chief inspector for state management and another for private management. The boss has to review on average, sheet by sheet, more than 400 folders to give authorization. Only he is authorized to put the seal.

Gustavo González, legal representative of the Franciscan Educational Center “San Antonio de Padua”, of the Merlo party, suffers firsthand the obstacles to opening. “We managed to create a distance school without being prepared in a week but it seems incredible that it is more difficult for us to return to the presence. This bureaucratic system does not work in the 21st century. You have to present a huge amount of pieces of paper that ends up hindering the possibility of the kids meeting again. Once and for all we have to review this cult of bureaucracy “, he raised.

Meanwhile, schools must request permission from families and diagram the bubbles, with one teacher for every nine students. A task that is made more complex by the position of the unions, which maintain their initial position: they only accompany the return in areas with low or no circulation of the virus, when the Federal Council approved objective health indicators in October that go in another direction.

Juan Carlos Juárez, legal representative of the Fleming Institute of Mar del Plata, has not yet obtained authorization because the protocol requires that the activities take place in fenced open spaces. “More than 70% of the city’s schools are outside of that protocol because none of them have such spaces nor do we have budgets to rent a property. It’s stupid. At this time of year it is difficult to go out and look for spaces. There is no real political will to be seen. Parents are asking what the end of the year is going to be like and are already doubting about 2021. We are in big trouble. If this is extended to the next school year, we will continue with the same difficulties ”.

Fundación Proa’s exhibition takes a tour of more than two decades of artists who participated in the space, such as Marta Minujín, Liliana Porter, Alicia Herrera, Liliana Maresca and Louise Bourgeois, among others

Fundación Proa’s exhibition takes a tour of more than two decades of artists who participated in the space, such as Marta Minujín, Liliana Porter, Alicia Herrera, Liliana Maresca and Louise Bourgeois, among others