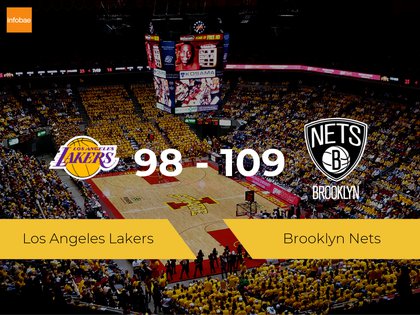 Brooklyn nets beat out of home Los angeles lakers by 98-109 in a new day of the NBA. On the previous day, the Los Angeles Lakers players managed to win at home against Minnesota Timberwolves by 104-112. For their part, the Brooklyn Nets also beat away from home Phoenix suns by 124-128, so after the game they accumulated six consecutive wins. With this result, Brooklyn nets which would allow him to qualify for the Play-offs with 19 games won out of 31 played, while Los angeles lakersAfter the game, he also continues in Play-off positions with 22 games won out of 30 played.

The first quarter was led by the Brooklyn Nets players, in fact, they achieved a 10-2 run during the quarter and took the maximum difference (seven points) at the end of the quarter to finish with a result of 24-31. Later, in the second quarter Brooklyn nets increased their difference, in fact, the team got another partial 11-2 and increased the difference to a maximum of 19 points (41-60) during the quarter, which ended with a partial result of 29-33. After this, the rivals accumulated a total of 53-64 points before the break.

During the third quarter the players of Brooklyn nets They managed to distance themselves again in the electronic, in fact, the team achieved a partial in this quarter of 12-2 and came to win by 20 points (67-87) and ended with a partial result of 21-26 and a 74-90 overall result. Finally, during the last quarter the local players managed to get closer on the scoreboard again, in fact, they achieved a partial during this quarter of 12-2, although not enough to win the game and the quarter concluded with a partial result of 24-19. After all this, the clash ended with a score of 98-109 in favor of Brooklyn nets.