The Italian manufacturer Brembo is celebrating its 60th anniversary. Sixty years dedicated body and soul to the world of braking, and they thought that a great way to celebrate it was by presenting a concept. But what kind of concept can a brake manufacturer come up with? It’s called Brembo G Sessanta and it’s a brake caliper with integrated LEDs. If you are one of those with the glass half full, a great way to personalize the aesthetics of a car or motorcycle. If you are from the glass half empty, you may see it as a tacky one worthy of the Maxi Tuning years.

In this life nothing is black or white, everything is rather gray. And yet one server believes that these brake calipers offer many possibilities, and could open up a new dimension in the seemingly simple world of brakes. The first thing you should know is that They are geared towards motorcycles, but the technology could be applicable to a car, since the brake calipers have an identical function, varying only in size and stopping power. Its main innovation is in the integration of LED strips in the body of the clamp. 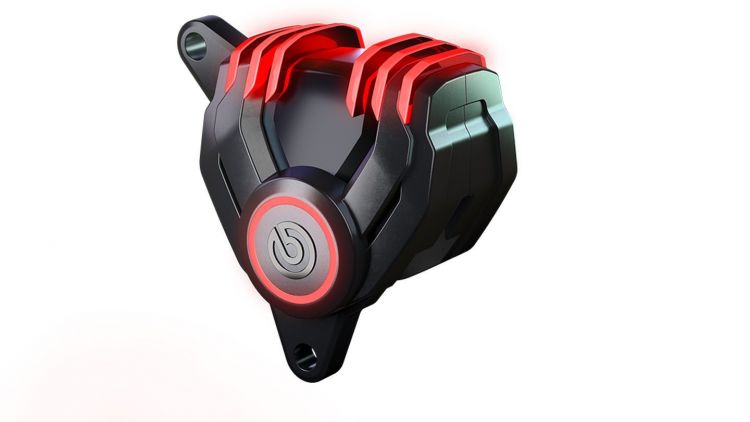 Its design emulates the first motorcycle brake caliper manufactured by Brembo, back in 1972.

These LED strips can be used for many applications, and can be controlled both by the motorcycle’s electronic control unit, as well as by a smartphone application, via Bluetooth. Among the most practical and useful applications is that of know by means of a visual code the wear of the brake pads, the possibility of being illuminated in red when the motorcycle’s brakes are activated – more visibility and more safety for the rider – or the courtesy light function, capable of illuminating the area around the motorcycle.

The system can also function as a defense against the possible theft of the motorcycle, by blocking the clamps from the mobile phone application. It could also help us locate a parked motorcycle by flashing. Regarding the aesthetic dimension, it opens up a world of possibilities when it comes to customizing the aesthetics of the motorcycle, although in this case, it would be necessary to see if its homologation would be possible – something tells me that the DGT would not look favorably on lights of colors in full rim of motorcycles.

The first commercial application of this system could still take a few years.

Another reasonable doubt is the power supply of these LEDs, as well as the types of sensors that the system must use. Recall that to date, the brake calipers are purely mechanical elements, whose operation is based on a pressurized hydraulic fluid. But if something is clear, whether we like this invention or not, it is that there is a great margin for innovation in components where apparently “everything was invented”.