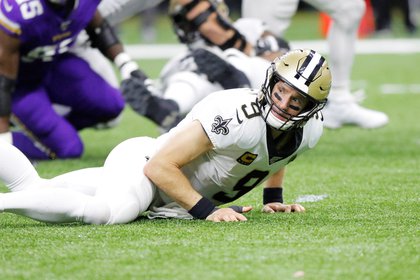 In the image a record of Drew Brees, veteran quarterback of the New Orleans Saints, who suffers broken ribs on both sides of his chest and has a collapsed right lung, after being injured in a game against the San Francisco 49ers. . / Dan Anderson / Archive

New Orleans (USA), Nov 16 . .- The New Orleans Saints confirmed this Monday that veteran quarterback Drew Brees, injured on Sunday during the game they played against the San Francisco 49ers, suffers ribs are broken on both sides of his chest and his right lung is collapsed.
The team reported that the player is already under treatment, but it is unknown how long he may be off and when he will return to the competition after the veteran quarterback has only missed six games in his National League career. American Football (NFL).
The most optimistic schedule for a comeback is two to three weeks, but it could be extended for another two more if the player does not want to suffer some kind of relapse, especially in terms of lung healing.
The two broken ribs on his right side occurred in the first half of the Saints’ 27-13 victory over the 49ers, a game that was concluded by backup quarterback Jameis Winston after Brees determined he couldn’t go on. playing because he had difficulty breathing.
The three fractured ribs on the left side are believed to have occurred in the previous Sunday’s game against the Tampa Bay Buccaneers, although they did not appear as such on the X-ray taken at the time, possibly due to inflammation, something that could be seen. clearly on the CT scan performed on Monday.
Doctors conducting the evaluation believe that the fractures on the right side could have punctured Brees’ lung, creating a pneumothorax.
That’s what caused Brees’ shortness of breath in the game and resulted in him informing head coach Sean Payton that he couldn’t play the second half against the 49ers.
The Saints (7-2), leaders of the National Conference (NFC) Southern Division included Brees, 41, in their injury report last week with a shoulder ailment, and that caused him enough pain to so that he would not realize the rib injury he suffered against the Buccaneers.