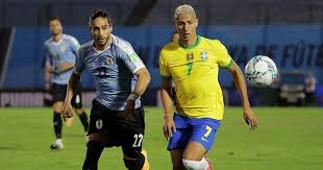 Leader Brazil continues its perfect march in the South American qualifier by defeating Uruguay 2-0 in Montevideo, chaining its fourth consecutive victory, in a day of surprises in which Ecuador defeated Colombia 6-1 and Venezuela defeated 2-1 to Chile.

Paraguay, in turn, suffered a barbarous scare and barely drew 2-2 with bottom-side Bolivia in Asunción and wasted the opportunity to sneak into the vanguard group.

The fourth day was completed with Peru against Argentina in Lima.

It reached him without Neymar

Brazil, without dazzling, defeated a low-flying Uruguay 2-0, completing the first four games of the tie with victories and cutting only in the standings with 12 points.

Uruguay was a litmus test for the Seleçao, who in their first three appearances faced and defeated weak rivals: Bolivia, Venezuela and Peru, who occupy the last three positions.

Without Neymar, Brazil is no more than a ‘common’ team, who makes the most of their chances and is very powerful in defense.

Anyway, Uruguay missed Suárez more than Brazil missed Neymar. The ‘gunman’ tested positive for covid-19 on the eve of this South American classic and left Celeste without offensive strength, which had some occasions in the first stage.

To make matters worse, the other Uruguayan gunner Edinson Cavani was sent off and will not be able to face Argentina in March at the Rio de la Plata Classic.

Brazil extended its 19-year streak without defeats in this traditional clash and is on the way to achieving a smooth pass to the Qatar-2022 World Cup.

In one of its worst performances at the South American level, Colombia received four goals in just 40 minutes of play but ended up losing 6-1, in an Ecuadorian festival that uncovered gargantuan defensive errors by the coffee growers and left its coach, the Portuguese Carlos Queiroz, on the tightrope.

The Ecuadorian team led by Argentine Gustavo Alfaro crowned a perfect double day. It began on Thursday with a 3-2 win over Bolivia at the height of La Paz (3,600 meters) and closed with a 6-1 win in Quito. Thus, he was second, with nine points, behind Brazil, after chaining three consecutive victories and can dream of one of the four direct tickets from South America to Qatar-2022.

Colombia, on the other hand, lost its two duels of the double date in a resounding way: it received the biggest home win in the history of the qualifiers, on Friday against Uruguay 3-0, and this Tuesday another painful defeat against Ecuador that, without great figures, stands out in the world premier.

In the midst of Colombian impotence, Queiroz made four simultaneous changes before concluding the first stage, a decision rarely seen since the five team replacements rule, but the desperate determination did not pay off.

It is “a very heavy result. We have neither pride nor honor to be with a result like this,” Queiroz declared at a press conference after the meeting in Quito.

Colombia now has a penalty with four points and must be used to the full on the next date in March to correct a lost course.

Another great surprise on the fourth date came from Venezuela in Caracas against Chile, which was on the rise after defeating Peru 2-0 in the Clásico del Pacífico, and achieved its first three points that give it a certain air in the long tie.

In the process of replacement, Chile depends on ‘King’ Arturo Vidal, who scored both goals against Peru and the only one of his selection against weak Venezuela.

La Vinotinto wants to clear the risk of remaining the only South American team that has never qualified for a World Cup.

Paraguay missed a golden opportunity on Tuesday to head for one of the four direct South American tickets to the World Cup by drawing 2-2 with weak Bolivia.

After obtaining a valuable draw against Argentina, the Guaraní team (6 points) could not with a beaten Bolivia, which had lost the three previous games, including two at the height of La Paz, a place that is no longer so invulnerable.

The Guaraní squad cannot afford to leave vital points in their stronghold in Asunción if they intend to return to a World Cup after missing Brazil-2014 and Russia-2018.

Bolivia, on his side, obtained his first point in the tie although he also did not come out of the last place.