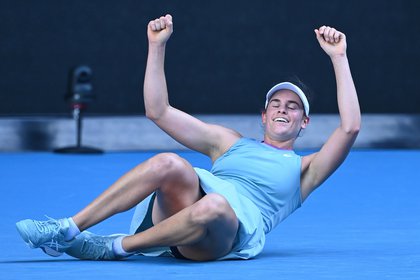 Melbourne (Australia), Feb 19 . .- The American Jeniffer Brady (22) will seek revenge in the final of the Australian Open against the Japanese Naomi Osaka (3), undefeated for more than a year, after the Japan won in three sets in the semifinals of the last edition of the Australian Open.
“When I go out there, she is not going to pass me over. When I go out on the court I have to have the mentality that I am not below her. I have a chance of winning,” Brady said after beating in three sets in the semifinals to Czech Karolina Muchova (25) and thus become the seventh tennis player to make her debut in a Grand Slam final in the last nine editions.
She therefore surpassed her best record in ‘major’ competition, dating from the semifinals in which she encountered at Flushing Meadows with which she will be her rival in the final at Melbourne Park, and will have the opportunity to proclaim herself as the second American to lift the title on the banks of the Yarra River consecutively, after the crown won by her compatriot Sofia Kenin in 2020.
On her way to the final she had to beat the Spanish Aliona Bolsava, the American Madison Brengle, the Slovenian Kaja Juvan, the Croatian Dona Vekic (22), the American Jessica Pegula and the Czech Muchova.
For her part, the Japanese Osaka, champion of three Grand Slam crowns (2 US Opens and an Australian Open), went through some more demanding crosses after dismissing the Russian Anastasia Pavlyuchenkova, the French Caroline García, the Tunisian Ons Jabeur (27), the Spanish Garbiñe Muguruza (14), the Taiwanese Su-Wei Hsieh and the American Serena Williams (10).
The Japanese woman lives one of the sweetest moments of her young and successful career, accumulating more than a year without losing an official match.
Their last defeat dates from their stumble in the Fed Cup tie against Spain when they fell to Sara Sorribes Tormo by a resounding 6-0, 6-3.
Since then, he has prevailed in all the matches related to the tournaments he played (Cincinnati, United States Open, Gippsland Trophy and Australian Open), despite the fact that both in Cincinnati and the Gippsland Trophy he could not lift the crown after leaving for injury before contesting the final.
Osaka, who never lost a Grand Slam final, will have a chance to become the 12th woman to lift the Daphne Akhurst Memorial Trophy on more than one occasion.
The Japanese will arrive more seasoned in the final after having passed Grand Slam final level matches from which she came out mentally comforted, such as the one in the round of 16 against the Spanish Garbiñe Muguruza (14) in which she had to save two match balls at serve during the last set.
“The experience of having played these types of finals is important because you can use those things you learned about mistakes you made in similar situations,” explained the third-placed world.
Osaka could climb one place on the WTA list and become number two in the event of lifting the title, while American Brady will enter the top twenty in the world regardless of the result she obtains this Saturday.
The final will start at 9.30 CET on the Rod Laver Arena track, which will host the public for the third consecutive day after it did not have spectators in its stands for five days due to the confinement to which the city of Melbourne was subjected.