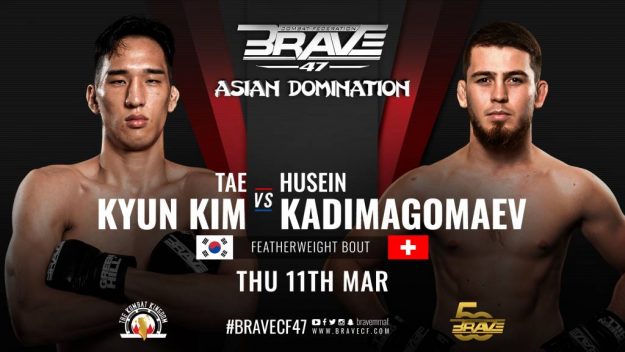 SEEF DISTRICT._ Kombat Kingdom will host an exciting duel between two undefeated young fighters, as Swiss Husein Kadimagomaev will face South Korean Tae Kyun Kim himself in an explosive featherweight fight that will serve as the co-main event of BRAVE CF 47 : Asian Domination.

With a professional record of seven wins and no losses, Kadimagomaev has a combined 18-0 record, including 11 amateur wins.

The Swiss star never saw the judges’ scorecards, as all of his victories came by knockout or submission. “Lamen Borz” is seen as one of the biggest rising stars in Europe.

Kadimagomaev hopes to live up to the high expectations left behind by his first appearance at BRAVE CF, in August 2020, when he knocked out Sven Fortenbacher in the second round.

His opponent, Tae Kyun Kim, also has a record of 7 professional wins and no losses to his name. Kim has a 71% completion rate, with 3 submissions and 2 knockouts.

BRAVE CF 47 will take place on March 11 in the Kingdom of Bahrain, also known as the Kombat Kingdom. The event will open a series of four consecutive cards from the truly global promotion in their home country, culminating in a historic BRAVE CF 50 on April 1.

The event will be headlined by a lightweight title eliminator between Abdysalam Kubanychbek of Kyrgyzstan and Rolando Dy of the Philippines. The winner of the “Omok” vs. “Dy Incredible” showdown will be next in line to take on Amin Ayoub’s 155-pound world title.