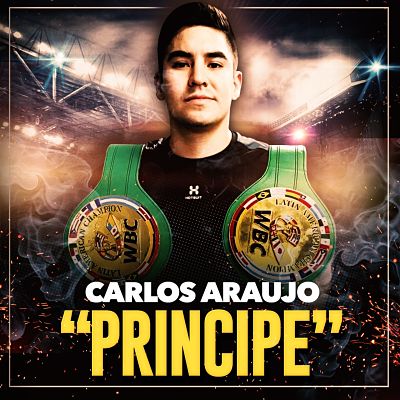 Grateful for the confidence and motivated by the showcase that presents in ‘El Templo TUDN’ means, the Mochitean knockout Carlos ‘Príncipe’ Araujo said he was ready to take action as soon as required.

Latin Champion of the World Boxing Council in super featherweight and featherweight, enlists in his native Ahome, Sinaloa; for what will be his debut match under the tutelage of Promociones del Pueblo, a company directed by Oswaldo Küchle and who direct his destiny in co-promotion with businessman Javier Cubedo.

The ‘Prince’ assured in an interview that he is motivated, by the confidence to appear on national television, as it is the leap he hoped to make in his successful career, along with his younger brother, the undefeated Luis ‘Peluchín’ Araujo, who also signed contract to start 2021 on the right foot.

The disciple of Jorge Luis López, adds as a professional 15 wins, 12 of them by knockout, in exchange for a setback; and accumulates 6 knockouts in his last 7 commitments, two of them being in dispute for the Latin American crowns endorsed by the WBC and which he obtained by knocking out the South Californian Jesús Arévalo and the Mazatlan Abel Cruz, both in visitor status.