With his knockout of the “Alacrán” Berchelt 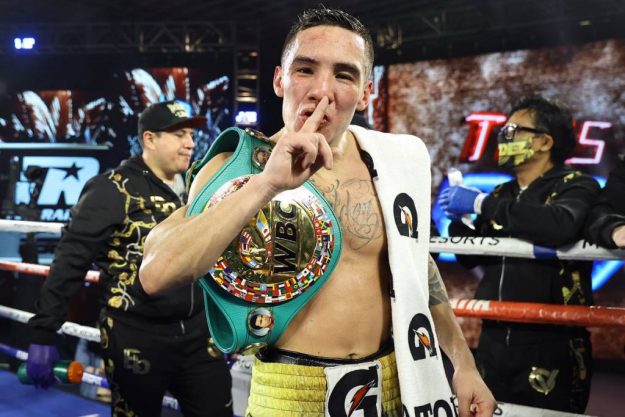 Against the prognosis of the experts, the pride of Nogales, Sinaloa, Oscar Valdez demonstrated that with good athletic preparation and adequate strategy, the physical advantages of a tall and strong champion like “Alacrán” Miguel Berchelt can be overcome. The Nogalense handled his left hand with precision and his legs with great speed to overcome almost all the time a bewildered Berchelt who was slow and indecisive against a very safe and fast Valdez. The definition came in round 10 when everything seemed that the fight could extend until the final bell.

From the beginning it was superior

Under enormous expectations at the MGM Grand in Las Vegas, veteran referee Russell Mora gave the final indications to the contenders. Deadly silence in the huge green glass hotel that stands out on the horizon of the “City of the Game”. From the beginning you could see the superior speed of the challenger who looked fast and confident. Berchelt looked expectantly as if he was studying the situation, but he showed slightly some detail of indecision and discomfort. Valdez’s jab pierced the champion’s guard several times and was annoying him in these first three minutes. The second round continued with little action from the fighters who seemed to be studying and saving themselves for more critical stays. However, Valdez was still the aggressor in the fight.

In the third, although no one forced the train, the champion was seen to be a little more intent than in the previous rounds. Valdez, however, continued to look faster and with superior initiative in attack. In the fourth round, the first big problem in the fight appeared, both came out more determined and several changes of blows were considered. Valdez went to the front and connected a pair of forehand that seemed to hurt Berchelt, the Nogalense followed the attack and with a combination made the “Alacrán” stumble, who went to turn his back on the ropes at that moment the referee Rusell Mora stopped the actions and seemed to apply a count to Berchelt who looked dazed and wobbly.

The final seconds of this episode were an ordeal for the champion who, with great difficulty, ended up standing, aided by the bell. In spite of this, in the fifth round Valdez took it easy and did not rush out to look for the shot as some might presume. The brave Berchelt made efforts to regain his balance and sought to come back in the fight he was seen against. Sixth and seventh rounds represented a rebound for Berchelt and a decline in the actions of Valdez who came to live some moment of anguish. These were the few happy moments that the “Alacrán” lived in the fight. The eighth brought a rebound in Valdez’s actions, who managed to connect a couple of good combinations that gave him an advantage in the round.

In the ninth, the challenger resumed his rhythm and showed the confidence that he was seen in the first rounds. His blows returned to hurt the humanity of Berchelt who was passing work again. A powerful left sent the champion to the canvas who stood in poor condition. After anguished seconds the bell was kind to the “Scorpion” again. But the joy did not last long because, after two minutes of hunting by Valdez, he took advantage of the fact that Berchelt opened the guard in one of his attacks, to slip an accurate left hook to the jaw that sent the “Alacrán” to the canvas and right there the fight ended.

The native of Cancun Quintana Roo, remained inert on the canvas for several seconds that seemed like an eternity and caused panic in the fans that foreshadowed a tragedy. Slight movements on his face indicated that the fighter was reacting and that the horror movie was coming to an end. Oscar Valdez is now the new WBC Super Feather Champion and is apparently the best in the world in his category for what is expected for him, a long reign.