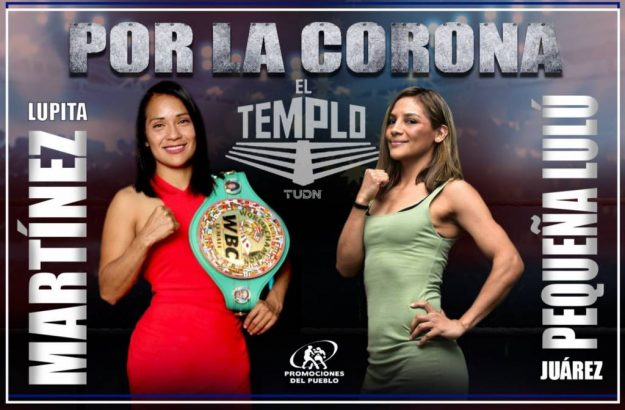 The top boxing venue will open its doors in January for a clash of two female warriors, world champion Guadalupe Martínez and number one ranked Lourdes ‘La Pequena Lulú’ Juárez who will seek to shine in the light of ‘El Templo’ and occupy the throne.

The clash will take place amid great expectations, as fans want to see the best, facing the best in this new concept of TUDN; and without a doubt we will have a clash between two fighters who are in the best moment of their careers.

In dispute will be the green and gold belt of the World Boxing Council held by Guadalupe Martínez (20-9, 6 KO’s), from Tlalnepantla, State of Mexico; who defends for the sixth time the title that she snatched from Zulina Muñoz in 2017 and who has successfully defended against rivals in the category of the Panamanian Carlota Santos, and the Mexican Irma García, Yuliahn Luna, Yessica Chávez and Debani Balderas.

Juárez Trejo (30-2, 4 KO’s) was awarded the passport to the absolute title dispute after winning an eliminatory duel against Jacqueline Calvo; He has faced renowned rivals who have won titles such as: Guadalupe Bautista, Edith Flores, Jazmín Bautista, Yesenia Gómez, Karina Fernández, Cecilia Santoscoy, Diana Fernández and Puerto Rican Noemí Bosques; acquiring the necessary boards to go in search of the absolute sash.

The sensational battle will headline the billboard presented by Promociones del Pueblo in association with Cancún Boxing by Pepe Gómez and Boxing Time by Memo Rocha; through the signal of TUDN and Channel 5 in the voice of its team of expert commentators.