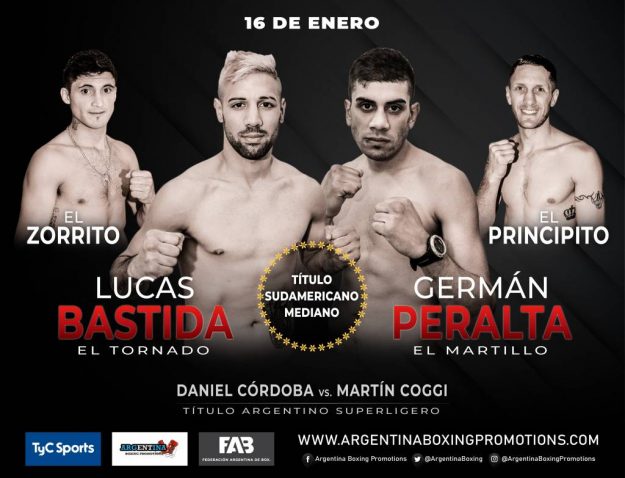 A night of explosive clashes is approaching, with important champions, recognized names and promising prospects, from the hand of Argentina Boxing Promotions by TyC Sports. The South American middleweight champion, the rising Mar del Plata Lucas “El Tornado” Bastida, will face the Buenos Aires Germán “El Martillo” Peralta, trying to defend his crown for the second time, in one of the stellar matches of the evening that will take place this Saturday, 16 January, at the Municipal Micro-stadium of Hurlingham, province of Buenos Aires, Argentina, in a new production of Argentina Boxing Promotions, by Mario Margossian, which will be broadcast live through TyC Sports starting at 23:55, for Argentina and all of America. TyC Sports Play will start live at 22.

In the other stellar fight of the night, the Argentine superlight champion, the Buenos Aires Daniel “El Zorrito” Córdoba, will face the former South American and Latin Buenos Aires champion Martín “El Principito” Coggi, trying to defend his crown for the first time.

In a clash that is expected to be exciting, Bastida (15-1, 8 KOs), current No. 1 in the Argentine middleweight ranking, will seek to shine again. The one born in Mar del Plata 23 years ago, owner of a great present after defeating, among others, Nicolás Verón from Buenos Aires, Sergio Paysse from Entre Ríos, Cristian Zárate from Pampas, Dominican Félix Vargas, and Ezequiel Romero from Buenos Aires, will seek to defend for the second time the scepter that he conquered on January 11, 2020 when he struck down Gonzalo Chaparro from Chaco in the first round in Mar del Plata, and that after dominating Marcelo Bzowski from Buenos Aires he retained on December 11 by destroying Sergio López in the first round in Garín, Buenos Aires. In front will be Peralta (8-7-5, 1 KO), a 30-year-old Buenos Aires resident of Florencio Varela, No. 8 of the middle national ranking, winner of Marcelo Farías from Buenos Aires, equaled with Dominican Henrri Polanco, and after his participation in the tournament of the middle players where he beat the Buenos Aires Tomás Reynoso, fell against the Chubut Jonathan Sánchez and the Entre Ríos Marcelo Cóceres, in addition to two incursions in Russia losing on the cards with the locals Sergei Shigashev and Timur Kerefov, comes last December 11 to liquidate the Tucuman Cristian Ríos in a chapter in the city of Buenos Aires.

CÓRDOBA-COGGI IN THE OTHER STAR
In the other stellar fight of the night, the Argentine super lightweight champion, Buenos Aires Daniel “El Zorrito” Córdoba (12-6-0-2 sd, 2 KOs), will face the South American and Latin Buenos Aires champion Martín “El Principito” Coggi (37-9-3-1 sd, 18 KOs), trying to defend his crown for the first time.

Córdoba, born in Tres Arroyos 26 years ago, after taking on rivals such as Javier Herrera from Catamarca and Héctor Sarmiento from Córdoba, surpassing names such as Martín Ruiz and Germán Benítez from Buenos Aires, Carlos Santana from Chubut, falling with Javier Clavero from Córdoba and Dominican Michel Rivera, defeated Elías Haedo from Buenos Aires and lost to the Armenian Vage Sarukhanyan in Moscow, will seek to defend for the first time the scepter that he conquered on February 21 by defeating the then undefeated Buenos Aires Nicolás Andino in a unanimous ruling in the city of Buenos Aires . Now he will see them with Coggi, a 37-year-old native of Brandsen, No. 9 in the Argentine superlight ranking, former South American and Latin champion of the World Boxing Council (WBC) of superlight, in addition to Latin interim welterweight WBC, winner of opponents such as Wilfredo Vilches from Mendoza, Cristian Solís and Diego Luque from Córdoba, Mariano Robledo from Catamarca and Pablo Barboza from Rosario, with international appearances against Cuban Brunet Zamora in Italy and French Christopher Sebire in France, in addition to setbacks with Germán Benítez from Buenos Aires and Rosario Sebastián Aguirre, comes from two successes in a row, on the Cordovan Leandro Rojo and the Pampean Sergio Gil, on December 27, 2019 in the city of Buenos Aires.

ATTRACTIVE BACKUP: ACOSTA-CÓRDOBA AND MORE
Beyond the headline duels, an attractive program completes the card. In the main complementary fight, Ezequiel “El León” Acosta (4-0, 3 KOs) from Mar del Plata will face the experienced Cordovan Sergio “El Chatito” Córdoba (7-10, 3 KOs), in a confrontation framed in the cruiser category and at a distance of four or six rounds.