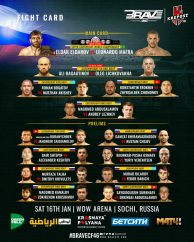 SEEF DISTRICT._ BRAVE CF’s lineup for BRAVE CF 46, the promotion’s debut event in Russia, already looks stacked. However, another fight will be added to the card, bringing the total number of fights to 13.

An exciting 59 KG matchweight fight has been added to BRAVE CF 46. Kamalov Magomed vs Zokirzhon Khoshimov will be in the preliminaries and will be the second fight of the night.

Magomed from Russia is a Sambo Master and Combat Sambo Champion of Russia. He is 4-1-1 and has never finished in a fight.

Nicknamed the ‘Bullet’, the 30-year-old fights on Fight Club “Motiv”. Zokirzhon Khoshimov is on a 5-fight winning streak. He has only one career decision win as he submitted or KO / TKO all other opponents. A talented fighter, he is a national wrestling champion of Uzbekistan.

The undercard is headlined by a title fight in which super lightweight champion Eldar Eldarov puts his belt on the line against Leonardo Mafra.