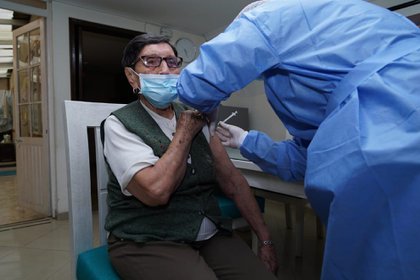 The Mayor’s Office of Bogotá reported that, this Tuesday, February 23, the immunization process of those over 80 years of age in the city began with the doses of the Sinovac vaccine that were delivered this afternoon by the Ministry of Health.

The mayor of the capital, Claudia López, reported that the process began in two geriatric care institutions in the city where ten adults over 80 years of age were vaccinated, who are within the group prioritized for immunization in the National Vaccination Plan.

In turn, the president indicated the way in which the 12,026 doses of the Chinese vaccine will be distributed for the vaccination process of the elderly, in which they will be delivered 4,000 vaccinations to about 500 geriatric homes in the city; 8,026 to the EPS, Sanitas, Nueva EPS, Capital and Health Police; and 20 for prisons.

“Today we receive 12,026 doses of Sinovac for people over 80 years of age. As we had already done several drills and we were organized, we have already started the vaccination process in Bogotá “, assured the mayor of the city.

Vaccination over 80 years in Bogotá

In turn, the president pointed out that of the first ten vaccinated 80-year-olds none reported symptoms or side effects after the application of the dose by the home team that carried out the process.

Similarly, Claudia López announced that The capital will receive this Thursday 13,008 additional doses of the Pfizer vaccine with which it will continue the immunization process for front-line health personnel.

Likewise, it will continue the vaccination process at the Colombia University Clinic, where 1,038 doses have been given and the Central Military Hospital, where 1,116 vaccines have been applied. 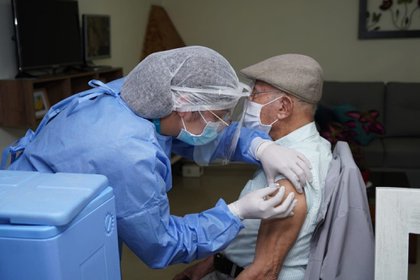 Bogotá started the vaccination process for people over 80 in two geriatric homes in the city. Photo: Ministry of Health.

“People over 80 years old in the city are just over 70,000 and we are only going to start with 12,000 doses, so we are also beginning to see how this population behaves and in this way we hope to vaccinate absolutely everyone”, indicated the Secretary of Health of Bogotá, Alejandro González.

You may be interested in: Alias ​​’Dimax’, leader of the Clan del Golfo in Urabá Antioqueño fell

In turn, the secretary indicated that the vaccination process in Bogotá is designed to be carried out closely to the homes of citizens. In that sense, he pointed out that in some cases adults over 80 years of age will be cited by scheduling for the process, which represents a commitment to establish new vaccination points if necessary. 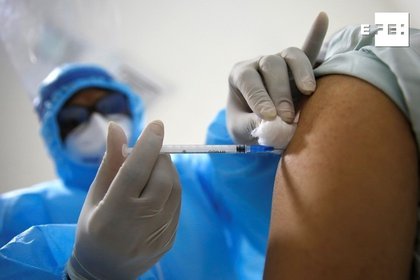 On the afternoon of this Tuesday, February 23, the Secretary of Health of Bogotá received 12,026 doses of the Sinovac vaccine against covid-19 with which the immunization process for those over 80 years of age begins.

With these vaccines from the Chinese pharmaceutical company, which entered the country on Saturday, February 20 in the shipment of 192,000 doses for the entire national territory, began the process of immunization of those over 80 who are part of the group prioritized in the first phase.

For his part, the Secretary of Health, Alejandro Gómez, pointed out that the capital is prepared to continue with the process of immunizing citizens after two days were held in the city in which a similar number of doses were applied against the covid -19 in health personnel.

You may be interested in: These are the ten generals called to the JEP in the case of false positives