In other results, Racing Club barely rescued an agonizing draw against Aldosivi (2-2) at home, Independiente beat Patronato 0-1 in Paraná and San Lorenzo will seek its second victory against Colón, in Santa Fe this Monday.

With a goal from Carlos Izquierdoz, the reigning two-time Argentine soccer champion took the clean and jerk off an opponent that left his coach, Frank Darío Kudelka, on the line. The dedication of the victory went to Captain Carlos Tevez, who had to return to Buenos Aires due to the death this Sunday of his stepfather, Segundo.

After its debut with a defeat against Estudiantes in La Plata, River Plate, for its part, recovered with a resounding 3-0 victory against Rosario Central in the match that marked the return of the ‘Millonario’ to its Monumental stadium.

Colombian Rafael Santos Borré, Gonzalo Montiel -from a penalty- and Uruguayan Nicolás De la Cruz scored the goals of a team that did not have its best performance but was forceful and added its first triumph of the tournament.

This duel marked the return of River to its stadium, which was under construction for 345 days, and which allowed Agustín Palaveccino to debut with the ‘millionaire’ jacket. 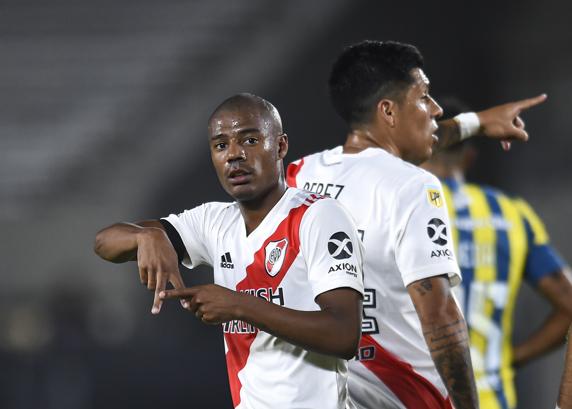 Juan Antonio Pizzi’s Racing continues without being able to win in this Cup of the Professional League of Argentine Soccer. To the defeat of the debut by 2-0 against Banfield, the ‘Academy’ added this Saturday an agonizing 2-2 draw at home against Aldosivi.

Leandro Maciel and Federico Andrada scored the goals for the Mar del Plata team, while the recently arrived Enzo Copetti and Tomás Chancalay scored for the ‘Academy’.

The black note on Saturday evening at the ‘Cilindro de Avellaneda’ stadium was the bad news that Fernando Gago received at the end of the meeting with the death of a brother after suffering a cardiovascular accident (CVA).

Independiente takes a breath after a difficult week

The Independiente de Julio César Falcioni recovered from the premiere with a fall to Lanús on the opening day and beat Patronato in Paraná as a visitor 0-1.

The only goal of the match was scored by central defender Juan Manuel Insaurralde, the only addition available to the coach from Chile’s Colo Colo.

In this way, the ‘Red’ takes air in a complicated week where he had economic turbulence, complications in the closing of the transfer period and some internal complications derived from the fall against Lanús.

After completing much of the second day of the contest, only four teams – two per zone – achieved the ideal score of six units as a result of two victories.

In Group A, Lanús won 2-1 against Defensa and Justicia in the reissue of the last final of the Copa Sudamericana, while Vélez defeated recently promoted Sarmiento 1-2 in Junín.

For Zone B, meanwhile, the current runner-up Banfield beat Arsenal de Sarandí 2-0 on Friday with two goals from Giuliano Galoppo -the top gunner of the tournament with three targets-, while Estudiantes won with authority 0-2 to Godoy Cruz, in Mendoza.