In a promotional video for BMW’s #NEXTGen initiative, we were able to clearly see several sketches of the new pure electric variant of the MINI John Cooper Works GP. This new variant has not yet been officially announced but there is already too much evidence of its existence, so we can already wait for its launch.

A few days ago we showed you the first images of a slightly camouflaged prototype of the future pure electric variant of the MINI John Cooper Works GP. A very special model that uses the same radical aerodynamic and frame scheme as the eponymous version which has already reached the market but instead of the 2.0-liter 306 hp engine it has an electrical mechanism that we assume will be a derivative of the one used by the MINI Cooper SE.

Those first images left no room for doubt, the new battery-powered variant is going to be practically identical to the limited edition traditional combustion version that we already know, except for differences inherent in the new powertrain. Which includes the disappearance of the exhaust outlets. 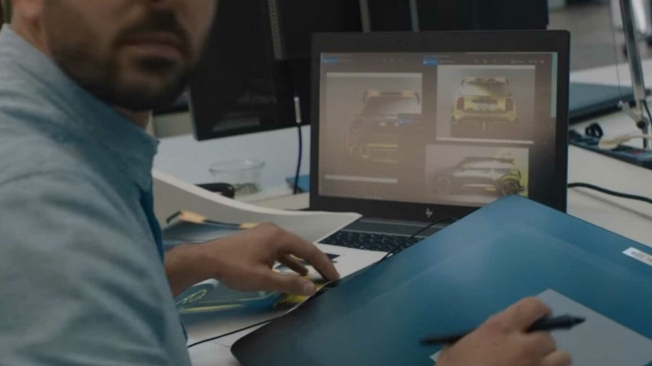 This leak is not accidental.

Now we meet again with new images of the model, although this time it is not a furtively photographed prototype, but from some sketches that have been unveiled by the brand itself. Although they have supposedly been unintentionally revealed.

In one of the extensive videos of the initiative #NEXTGen of BMW, a promotional platform whose objective is to cover the next novelties for the electric segment of the Munich firm, as was the case with the recent presentations of the BMW iX or the BMW Definition CE 04, several sketches have appeared that clearly show to the new electric sports car from the British firm. Although in the video we found a recreation that tries to pass this leak as unintentional, the truth is that it is practically impossible for the video editors and marketing managers of the German firm to have slipped such clear images of the model. So that we can say without fear of doubt that these sketches have been leaked by the brand itself, in the same way that Porsche slipped us a scale model related to the future Porsche Macan EV a few days ago

At the moment we cannot confirm the specifications and performance of this new electric variant of the British hot hatch, but it is evident, and these new sketches corroborate it, that this variant is going to be practically identical to the MINI John Cooper Works GP that we already know. Although it will have some small differences, as is the case of the 5-spoke wheels and the decoration with numerous touches of lime green, a detail directly inherited from the MINI Cooper SE.