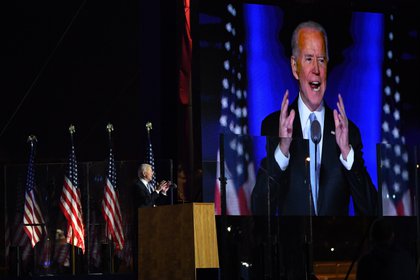 Washington, Jan 15 . .- The president-elect of the United States, Joe Biden, affirmed this Friday that the country continues in a “very dark winter” due to the covid-19 pandemic and warned that “things are going to get worse before getting better. ”
“We are still in a very dark winter. Infection rates have increased 34 percent and now there are more people hospitalized due to covid than ever,” said Biden, who will take over the Presidency next Wednesday to replace Donald Trump.
The Democratic leader recalled that the United States is registering a daily average of “between 3,000 and 4,000 deaths as we approach the grim milestone of 400,000 deaths.”
According to an independent tally by Johns Hopkins University, the United States remains the worst-hit country in the world by the pandemic, with 23.4 million cases and 391,098 deaths.
The Centers for Disease Control and Prevention (CDC) warned on Friday that a much more contagious variant of the coronavirus, first identified in Britain, could advance rapidly in the United States and become the dominant vector of infections within two months. .
These projections are of particular concern for nursing homes and hospitals, many of which are already operating at or near their maximum capacity.
“I want to emphasize that we are deeply concerned that this strain is more communicable and may accelerate outbreaks in the US in the coming weeks,” said CDC Deputy Director of Infectious Diseases Jay Butler.
“We urge people to realize that the pandemic is not over and that it is by no means time to throw in the towel,” he added.
Biden, for his part, recalled families who have lost a loved one and said he shares “the frustration we all feel” because “almost a year later, we are still far from returning to normalcy.”
The president-elect reiterated that the launch of the vaccine in the US has been a “resounding failure”, but promised to reach 100 million vaccinations in the first 100 days of his term.
“I am convinced that we can do it,” he insisted.
Biden said that once he takes office, he will immediately work with states to open vaccines to the highest priority groups and solve the problem of lack of distribution that is occurring with the opening of more vaccination sites.
“There are tens of millions of unused vaccine doses in a freezer, while people who want and need the vaccine cannot get it,” he said.
He anticipated that, after his first month in office, there will be a hundred vaccination points throughout the country in school gyms, sports stadiums or community centers, supported by the federal government, which will immunize millions of people.
He also promised the creation of mobile clinics that offer vaccines to hard-to-reach communities.
The president-elect announced this Thursday an ambitious plan that he will present to Congress to refloat the economy and curb the impact of the pandemic for which he will request 1.9 trillion dollars of budget allocation.