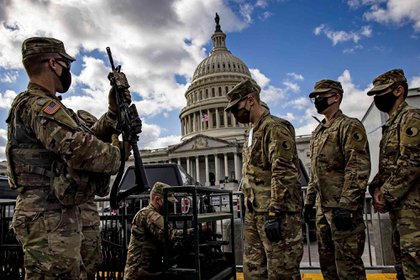 (Bloomberg) – Joe Biden will take the oath of office as president in a ceremony dramatically reshaped by the coronavirus pandemic and still-simmering threats of violence in Washington, casting a pall over the quadrennial celebration of American democracy.

His swearing-in at the US Capitol on Wednesday will come amid an unprecedented cordon of security, with strict physical distancing measures in place as well. A sea of ​​200,000 flags on the National Mall will stand in for the normally vast crowd cheering a new commander in chief.

And while Biden is using his inauguration to highlight “America United,” he faces a nation where many Republicans still reject his victory, including outgoing President Donald Trump – who Biden’s fellow Democrats and a handful of Republicans impeached for a second time last week despite Biden’s misgivings about the message it would send as he ascended to the presidency.

Trump is refusing to attend the ceremony, the first living Oval Office occupant to skip the regularly scheduled inauguration of his successor in more than a century.

Biden will become the 46th US president at noon on Jan. 20, a time prescribed by the Constitution. He’ll stand on the western-facing steps of the US Capitol building, a nod to the power of the legislative branch and the nation that stretches out before him. But he’s asked the audience to stay home.

The inauguration displays to the world the country’s tradition of a peaceful transfer of power, which will be represented this year by the inclusion of every living former president – except 96-year-old Jimmy Carter – and Vice President Mike Pence.

But Trump won’t be there. Fresh from his historic second impeachment, he’s expected to leave for his Mar-a-Lago club in Florida the morning of the event, and will not have Biden and his wife, Jill Biden, over to the White House beforehand, as is customary

The twin challenges of the coronavirus and security threats have meant that many traditions have been put on hold. The inaugural parade will be replaced by a short military procession. Balls and parties will give way to a 90-minute prime time TV special featuring musical performances and guests located around the country, all hosted by actor Tom Hanks.

Biden supporters were already being discouraged from coming to avoid turning it into a coronavirus super-spreader event. And now with the threat of violence, new security fencing topped with razor wire has been erected around the Capitol and troops stand guard 24 hours a day.

Not that anyone could get around the city anyway. Thirteen Metro subway stations will be closed and many roads are blocked around downtown. As many as 25,000 members of the National Guard are already in place in the city.

The property rental service AirBnB pre-emptively canceled all reservations in the DC area until after inauguration, citing concerns that properties were being rented by people looking to foment violence. Even bike sharing has been shut down.

Brian Toolan, senior director of government strategy at Everbridge, which is providing logistical support, said that a normal inauguration is already among the most complex large-scale events in the US, requiring coordination between multiple law enforcement agencies.

“Clearly this year is going to be different than any other year,” he said. “Regardless of the civil unrest, we’ve got a pandemic going on. We don’t want to see a million people standing next to each other watching the president get inaugurated. “

Some traditions will remain, however, and some more modern elements will also continue. A briefcase known as the “nuclear football” containing the codes to launch nuclear weapons will be handed from one aide to another, and the White House website and social media handles will switch automatically.

Pop icon Lady Gaga will sing the national anthem, and national Youth Poet Laureate Amanda Gorman will give a reading, a tradition started by President John F. Kennedy. A Jesuit priest will lead the invocation for Biden, the second Catholic president in US history, while the pastor of a Black church in Biden’s home state of Delaware will give the benediction. A female firefighter from Georgia, where Biden pulled off a surprise win, will lead the Pledge of Allegiance.

After the swearing-in, the Bidens will lay a wreath at the Tomb of the Unknown Solider at Arlington Cemetery. In a nod to continuity, he’ll be joined there by former presidents Bill Clinton, George W. Bush and Barack Obama and their wives.

The wreath laying is a new addition to the day’s events and is especially meaningful for Biden, whose late son, Beau, served in the National Guard in Iraq.

While the peaceful transfer of power is a pillar of US democracy, not all previous inaugurations have gone off smoothly.

John Adams, John Quincy Adams and Andrew Johnson all skipped their successors’ inaugurals out of spite. Abraham Lincoln came to his first ceremony surrounded by armed guards due to death threats; he took his second oath of office amid a civil war. And Obama and George W. Bush faced heightened security over concerns about terrorism.

Even the lack of crowds isn’t unprecedented. Ronald Reagan moved many events indoors at his second inauguration due to a severe cold snap that made gathering outdoors too dangerous. Daytime temperatures were in the single digits Fahrenheit, with wind chills of -25F (-32C).

Princeton University history professor Julian Zelizer said this month’s attack on the Capitol may have given new meaning to some of the traditions around inauguration, as a way to show to the American people and the world that the US government still stands.

“It’s a ceremony that has always been not just to recognize the new administration, but also to commemorate the peaceful transfer of power and the essence of how democracy works. That’s why it’s such a public display, ”Zelizer said. “Pulling back now would be granting to these threats of terror and saying that violence works.”