FC Barcelona is going through a very sweet moment of play and results that translate into the conquest of first place in the Euroleague for the first time with the current format and in a streak of 16 consecutive victories in the Endesa League.

Since the arrival of Sarunas Jasikevicius, rotations have been one of his obsessions so that the squad reaches the decisive phase of the course in the best possible conditions … little to do with what happened in the ‘Pesic era’.

This philosophy knows no exceptions and Nikola Mirotic himself is being one of the most affected by seeing his presence reduced on the track for the common good. Despite this lower exposure, the Spanish-Montenegrin has been performing at a very high level for weeks and good proof of this is that the Euroleague appointed him MVP for March yesterday.

Last Tuesday Mirotic completed one of his best matches in the defeat against Maccabi as a Barça player with 23 points, 10 rebounds and a PIR +34 (the same figure he reached at the Palau against Khimki). In fact, in the six European games he played at Barça last month, the ex-Madridista averaged 20 points, seven rebounds and +26.8.

‘Niko’ has thus risen to the leadership of the tournament in valuation and with authority with a sensational +21.96 on average, ahead of the 18.70 of the definitively ‘section’ Mike James (CSKA) and the 19.57 of the cyclothymic Alexei Shved, the leader of the evicted Khimki.

The Blaugrana team prevailed on Sunday at the Hereda San Pablo Burgos track (77-93) with another magnificent performance by a Mirotic who scored 21 points in 21 minutes with only three errors (4/5 in shots of two, 4/5 in triples and 1/2 in free throws), in addition to catching five rebounds. And it went to +24 (that is, more than one rating point per minute).

The Barcelona star is the fourth most valued player in the Endesa League with an average of 18.2 in the 21 minutes who plays per game, surpassed only by Giorgi Shermadini of Lenovo Tenerife with 23.4 (plays 24 minutes), by Ondrej Balvin of RETAbet Bilbao Basket with 21.1 (25) and by Real Madrid player Walter Tavares with 19.6 (25) . That is, it would be the second most valued per minute of play (0.87) by the 0.97 of the Georgian.

Saras is clear that Mirotic is her great emblem, but he is also convinced that there is enough quality in the squad to take responsibility at the decisive moments. This motivates that the Spanish international is not forced to take more shots than necessary, which translates into better percentages. 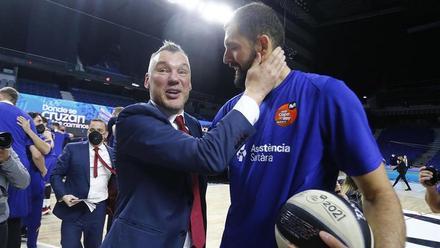 Saras and Mirotic, after winning the Copa del Rey

Another detail is that the Lithuanian coach He likes it when ‘Niko’ starts from the low post sometimes so that he plays it or so that he takes advantage of when they make him ‘two against one’ to double the ball to the perimeter with Abrines and Kuric as preferred recipients.

And beware, everything points to this week The Spanish-Montenegrin will be able to play again with his friend Pau Gasol, who could debut on Friday against Bayern or on Sunday in the Palau classic against his former team.