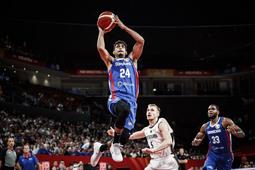 The absence of Canada in the qualifying “window-bubble” for the basketball Americup scheduled to be held this end of the month at Hard Rock in Punta Cana affects the image of the contest, but not its budget.

“It doesn’t hurt the Dominican Republic at the level of competition since our matches are against the Virgin Islands and Cuba. But for the image of the fair it would have been very good to have a team of that caliber ”, argued the president of the Dominican Basketball Federation (Fedombal) Rafael Uribe.

However, although there will be one less team in action, this does not mean any variation in relation to the costs of organizing the activity.

“They are almost 300 thousand dollars, the costs are maintained. The FIBA ​​(International Basketball Federation) staff will arrive in the country on Sunday and will proceed with the placement of the plank, lights, boards, etc. ”, added the chief executive of Creole basketball.

On Sunday the 29th the Dominican team will face the United States Virgin Islands starting at five in the afternoon, while on Monday the 30th they will collide with Cuba from eight at night.

The preselection, which was initially said to be about 14 players, was expanded to 24 due to factors linked to the new coronavirus Covid-19 pandemic that affects the entire world.

“We take into account if there is a positive case, so we must have a large staff, including some veterans who are safe with the team,” added Uribe.

To this have been added the cases of some players who have been hired for tournaments in countries such as Puerto Rico and Israel and have to comply with protocols to leave and re-enter those territories.

“There is a complex situation with the bubble in Puerto Rico, but FIBA ​​is already looking for a solution,” said the president of Fedombal. Víctor Liz, Gerardo Suero, Gelvis Solano and Ángel Núñez are in the Puerto Rican BSN, all summoned. For Israel is Rigoberto Mendoza.