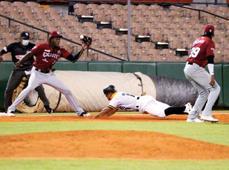 Nine innings were not enough to define the opening game at the Cibao Stadium, but the Gigantes del Cibao eventually beat the Aguilas Cibaeñas 8-5 in 10 innings.

In the eighth, the yellows who lost 3-5 leveled the scoreboard with two scores, the product of two transfers granted by pitcher Jesús Liranzo to Wilmer Difó and Víctor Robles and straight-ahead driving singles by Melky Cabrera and Juan Lagares.

Both teams went scoreless in the ninth and in the tenth the visitors made a three-score rally against pitcher Junior Fernández (0-1), crowned by Juan Francisco’s two-hitter double.

Manager Félix Fermín had to appeal to his bullpen before singing playball, since the imported Joe Van Meter, who would start the game, was injured while warming up, which motivated Marcos Diplán to go up to the box. The victory went to the pitcher Reymin Guduan, who threw a blank inning, with the loss to Junior Fernández, who gave up the three runs of the tenth and the game saved went to Ramón Ramírez (1).

The visitors did not wait and taking advantage of the lack of control of the Águilas starter they scored two, José Sirí negotiated transfer and stole second Jason Krizan missed with a fly to center, but Ronald Guzmán and Kelvin Gutiérrez received four bad to fill the pads, which took advantage Juan Francisco to hit a long double that towed two.

The locals discounted in the second with a homerun by Robel García.

The best
The Giants had their best hitter in Juan Francisco with three doubles and four RBIs.

To San Pedro
The Eagles visit the Eastern Stars this Monday at the Tetelo Vargas stadium, in San Francisco de Macorís.