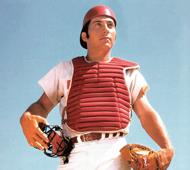 The sale, which involved in-person and online bidding, wrapped up Saturday at the Louisville Slugger Museum and Factory in Kentucky, not far from where Bench played many games of his brilliant career with the Cincinnati Reds.

The receiver played 17 seasons in the Major Leagues and was selected 14 times to the All-Star Game.

Bench, who will turn 73 in December, told The Associated Press last month that he planned to use the money raised to fund the education of his youngest children. The former player resides in Palm Beach Gardens, Florida, with his sons Bobby, 30; Justin, 14, and Josh, 11.

Lasorda recovered
Hall of Famer manager Tommy Lasorda is on the mend after he was hospitalized in intensive care in Orange, California, the Dodgers announced Sunday.

Lasorda, 93, was last seen at Globe Life Field in Arlington when the Los Angeles club sealed its World Series title.