The excellent line that Barça has been showing in the league competition, together with the continuous stumbling blocks of its rivals in one of the most even leagues in history (if not the one with the most) will allow Andreu Plaza’s men to face the last five games knowing that they will finish the regular phase first if they add up the 15 points at stake without looking at other results.

After adding only two points from the first 18 and reaching the leadership of Levante at 19 points, the Barça team started a comeback that led them to meet 17 games without knowing the defeat until he fell in the ‘re-run’ of the Pavelló Nou Colomense against Industrias 3-2.

The blaugrana, who have played the five finals this season with two titles (Champions League 2019-20 and Copa del Rey 2019-20) and three defeats (Champions, Copa de España and Copa del Rey 2020-21) have won three followed (6-3 to Levante, 0-2 to O Parrulo and 3-1 to Betis) and they would ensure first place in the regular league by winning all five of their commitments… in the hope that the rest of the candidates do not fail any more.

For this circumstance, the two very recent stumbles by ElPozo Murcia against Peñíscola Globeenergy (3-4 with a goal in the last minute from Argentine Agustín Plaza) and on the Burela court (6-6 … and thank you, since they fell 6-4 with four minutes to go).

The fact is that Barça is fifth with 55 points, six from the leading quartet that make up Jimbee Cartagena (two more games), Palma Futsal (two), Levante (two) and ElPozo (one). As Andreu Plaza’s team will host Diego Giustozzi’s team on March 22, he has in his hands to reach them all and surpass them by the particular goal-average. The only exception would be Palma Futsal (4-3 at Son Moix and 2-1 at the Palau), although in general those of Antonio Vadillo add up to +25 and the Catalans, +37. 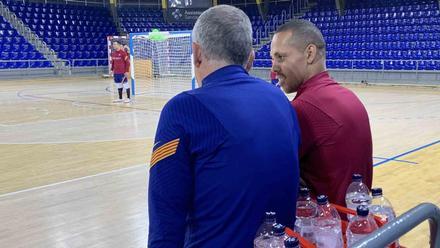 Barça will set off towards this new goal, which has come about thanks to the good work done this Saturday at the Jaén Paraíso Interior court., on Tuesday 18 he will visit Pescados Rubén Bureral, on 22-M he will receive El Pozo Murcia in a great game, three days later a BeSoccer UMA Antequera will arrive at the Palau that could already be descended and last weekend of May he will visit one of the more fit teams, the Aspil Vidal Ribera Navarra de Pato.

In addition to the enormous difficulty that this 15 of 15 entails, It must be remembered that Sergio Lozano will not play again this season, that goalkeeper Miquel Feixas is still injured and that neither Ferrao nor an Adolfo who had to undergo surgery after breaking a finger in the Champions League final is not expected for the next two duels.