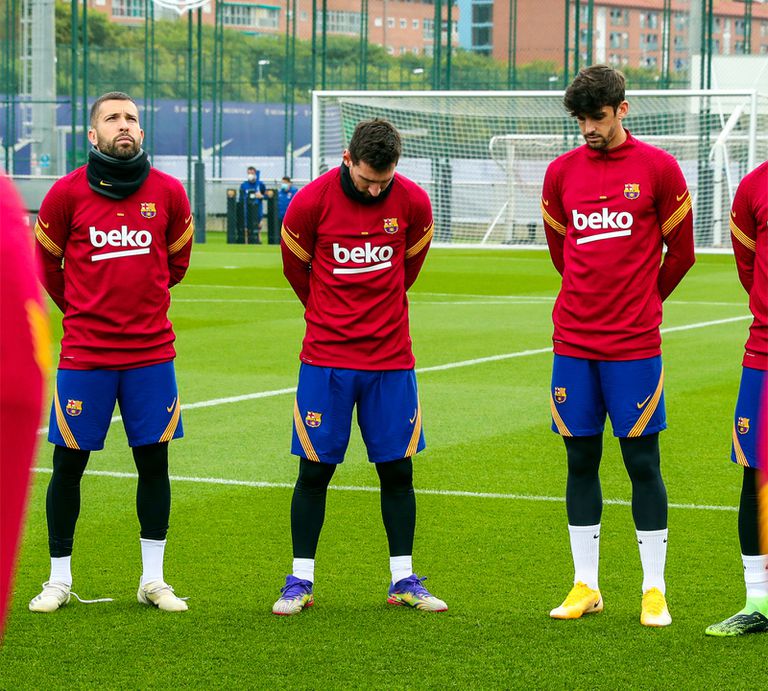 Jordi Alba, Messi and Trincão observe a minute of silence for Maradona.FCB

The legal representatives of the players of the first team and the Barcelona subsidiary and the management committee reached, after the meeting this Friday, an agreement in principle to readjust the salary cost in the current season. The pact, in any case, has to be ratified by the footballers. The lawyers of both parties stipulated a reduction in salaries of 122 million euros in fixed remuneration and 50 million in the budgeted variables, which will be deferred during the next four and three years respectively. “The agreement, if it is ratified, is a fact of great importance to redirect the current economic situation,” they announced in a joint statement.

The negotiation was not easy. In total, there were seven meetings between formal and informal. The negotiating table between Barcelona employees and the management committee was set up on October 21. Not all players participated in any case. Ter Stegen, Piqué, Lenglet and De Jong had already agreed with the then president, Josep Maria Bartomeu, an extension of their respective contracts, which already included the “temporary salary adjustment”, as cataloged in the club’s offices. Which meant that the four players accepted a salary reduction during the 2020-2021 season, in exchange for more years linked to the Barça club.

The problem, for the board of directors at that time, was that the rest of the players of the first team did not want individual agreements nor did they want to be part of a negotiating table with the rest of the club’s employees. When Bartomeu and his directors presented their resignation, the management committee chaired by Carles Tusquets took over. “The idea is to defer payments and reach an agreement that favors all parties. We don’t want to take money away from anyone, ”Tusquets explained. And he assured that the club needs “an effort of 300 million to balance the budgets.”

Then, Tusquets looked at the highest item in the results table: footballers’ salaries, 70% of the budget. LaLiga valued Barcelona’s salary cap for the 2020-2021 season at 382 million, 43% less than the previous season (671). “Barça has not done anything wrong. If it were not for the pandemic, they would not have to reduce their wage bill, ”justified Javier Tebas, president of the employer’s association. “The salary limit is not something fixed, it can vary according to income. If we show more income, we can increase it ”, they explained in Barcelona.

From the outset, the idea of ​​the commission was to lower the salaries of the players by 190 million. His intention was that what the club saved in the 2020-2021 season in salaries would be paid in 10 years. The players, who were predisposed to help the club in reducing their salaries, considered that the amount and, above all, the payment term were excessive. In the joint statement, the representatives of the players and the club explained that the 50 million budgeted in variables of the salaries of the players (for example: premium for championships won, for games played or goals scored) will be deferred in the next three exercises. However, they did not announce when the 122 million corresponding to the fixed amount will be paid. “We do not know why it was not put in the statement,” say sources of the negotiation.

In the opposition they are not satisfied. “We do not understand why they were seeking to reach an agreement, if the new president will have to negotiate,” says one of the candidates. “Besides,” he adds, “they did not get the amount they wanted.” The management commission wanted to save 190 million and the agreement was for 172, if fixed and variable amounts are taken into account. The pact with the players, the management committee or the new president should continue looking for other savings mechanisms to balance the budgets in the current season.

Minute of silence for Maradona

In training this Friday, the Barcelona squad observed a minute of silence in memory of Diego Armando Maradona, a Barça player between 1982 and 1984. Messi was very affected. Busquets was in the center circle of the field Tito Vilanova with his teammates. The pivot overcame the problems in his right knee and completed the entire work session. The one who is still in the infirmary is Araújo. Koeman will have to decide whether to continue betting on Mingueza to form a central duo with Lenglet or will use De Jong as a defender.