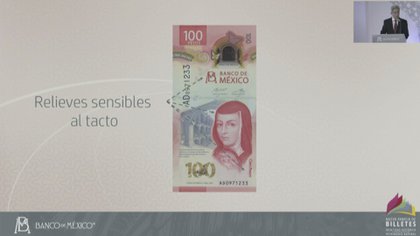 After the announcement of the new 100 peso bill in a vertical format and with Sor Juana as the image of the form, Internet users flooded social networks with memes, even comparing it with Venezuelan bolivars.

In this regard, the deputy governors of the Bank of Mexico (Banxico), Jonathan Heath and Gerardo Esquivel Hernández, published different arguments through Twitter, to remove the stigma that has been imposed on the internet on the new banknote.

Esquivel, for his part, assured that citizens may come to think that it is an eccentricity, and even cross it out as a copy of those printed in a country “with which they have nightmares”.

But he also released a curious fact about the history of the banknotes in Mexico, since it presented the first Mexican banknote in this format, issued in 2009 as part of the celebrations of the bicentennial of the Independence of Mexico, with Miguel Hidalgo on its obverse.

This was the first Mexican banknote that was printed in vertical format for the bicentennial of the Independence of Mexico (Photo: Twitter @esquivelgerardo)

For his part, Jonathan Heath, made a count of all the countries that have issued vertical banknotes or, in a mixed format. Among them he highlighted Argentina, Aruba, Bermuda, Canada, Colombia, Northern Ireland, Solomon Islands, Israel, Kazakhstan, Morocco, Nicaragua, Russia, Switzerland and the one mentioned by social networks, Venezuela.

Finally, he also reported that in the International Association of Currency Affairs (IACA), where recognition is granted Currency AwardAmong the five finalists in 2019, the new Mexican 500 peso bill stood out. 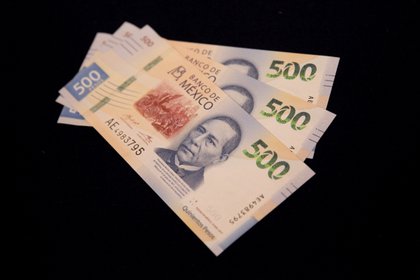 Two of the deputy governors spoke about vertical banknotes around the world and their history in Mexico (Photo: . / Sáshenka Gutiérrez)

The Bank of Mexico reported this week of the putting into circulation of the third denomination of the new family of Mexican banknotes, which was made available through the banking system as of Thursday, November 12.

According to the official statement, the new 100-peso bill presents improvements in its security, durability and functionality characteristics, as well as graphic motifs that represent the historical identity and natural heritage of our country.

This new banknote stands out for its high reinforced security measures that make it more difficult to forge and, at the same time, “easy to authenticate by users, including people with blindness and low vision”.

This was manufactured with the latest generation materials, which will allow, Banxico reported, to extend its useful life in circulation. The predominant color for this occasion is red and the substrate on which it is printed is polymer. In addition, they highlighted that it measures 132 mm long x 65 mm high.

The obverse illustrates the poet and writer Sor Juana Ines De La Cruz, as well as a fragment of the main courtyard of the Old College of San Ildefonso, located in the Historic Center of Mexico City.

On the reverse side you can see in detail the illustration of the temperate forest ecosystem in the Monarch Butterfly Biosphere Reserve, natural heritage of humanity, located in the State of Mexico and Michoacán.

“They frame the representation, the denomination with number in horizontal and vertical positions in the upper right and lower left corners, respectively, the transparent window in the upper left area, and below this, the text BANCO DE MÉXICO”, they revealed.