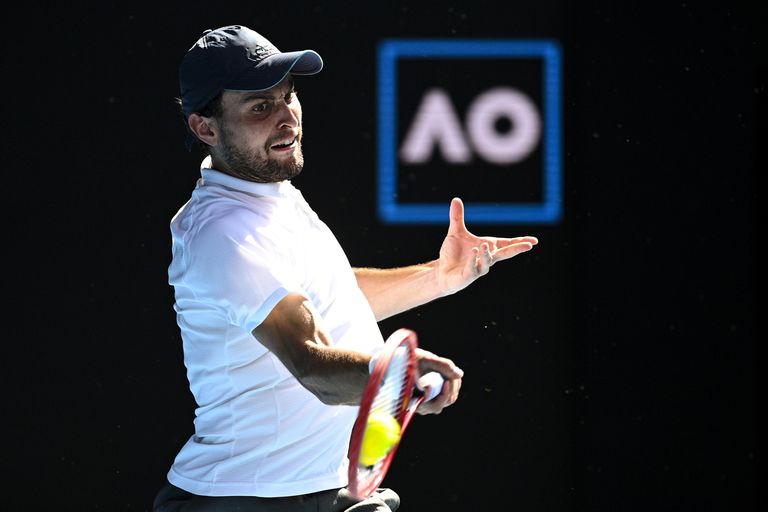 Karatsev hits the ball during the match against Dimitrov.DEAN LEWINS / .

Nobody was counting on him. Of course, because no one, not even himself surely, imagined that in his first appearance in a Grand Slam, after nine frustrated attempts to access a main draw since 2014, he would not only access but also stand in the semifinals. Hence Aslan Karatsev’s smile. The 27-year-old Russian, 114th in the world rankings, defeated the Bulgarian Grigor Dimitrov by 2-6, 6-4, 6-1 and 6-2 (in 2h, 28m) and was definitely uncovered as the great surprise of this Australian edition. In his own right, he’s already the first rookie in the Open Era (as of 1968) to reach the penultimate round on a big stage. There he will be measured against Novak Djokovic, who reduced Alexander Zverev in a fantastic cross (6-7 (6), 6-2, 6-4 and 7-6 (6), in 3h 30m).

Now this latest victory comes with an asterisk. Dimitrov, who wanted to get out of the very long tunnel in which his career has been translated, competed diminished from the third set and that meant a red carpet for Karatsev, who until now had never been among the 100 best in the world and as of next Monday It will climb, at least, to the 42nd rung of the ATP list. This is tennis, this is Australia; this Open at full speed that took off through thick and thin, leaving exotic notes in one frame and another. That of the male, without a doubt, stars him, an anonymous who will challenge Djokovic for a place in the final.

“I think I have received about 200 wasaps, but I think there will be some more,” joked the winner, a globetrotter who has gone from here to there: from his city to Israel, from there to Rostov and then to Moscow, before emigrating to Halle (Germany) and later to Barcelona, ​​to finally move to Minsk (Belarus), where he works today with his coach. “Yes, I would say that I have moved too much. If I can win the tournament? We’ll see, but for now I want to enjoy, go game by game, “he added. “This is sport. I couldn’t even put my socks on before the game, so I knew it was going to be tough for me. I tried, but it wasn’t enough, ”Dimitrov lamented.

Born in Vladikavkaz, right-handed and with two-handed backhand, Karatsev has successively dispatched Mager (96th), Guerásimov (79th), Schwartzman (9th) and Augger-Aliassime (19th) until he ended up in Dimitrov, who for one reason or another He cannot lift his head and aspired to match his best record in a Grand Slam. Semifinalist of Wimbledon in 2014, Australia 2017 and the US Open two years ago, his back played a trick on him this Tuesday and Katsarev obtained a triumph with capital letters that makes him the first Russian semifinalist in the ocean major since Marat did it Safin; this he did in 2002, for the third time.

History also says that the Russian is as of Tuesday the semifinalist of a major tournament with the lowest ranking since Goran Ivanisevic. The Croat, one of the great scooters in history, was 125th when he won Wimbledon in 2001, aged 29 and after receiving an invitation from the London event. The books also say that the American Patrick McEnroe reached the semifinals of the 1991 Australian Open when he occupied, coincidences of life, the 114th position of the ATP. The same as a certain Karatsev.

After Karatsev confirmed the chime of the day, the women’s team finished defining the first semifinal. Naomi Osaka did not fail at dawn and won by a double 6-2 to the veteran Su-Wei Hsieh, who at 35 years old has brought a nice touch to the tournament. Then, it was Serena Williams who blocked the way to Simona Halep (double 6-3) and confirmed a high-flying duel.

So far, the Japanese (23 years old, 3rd in the WTA) and the American (39 / 11th) have been the two brightest tennis players of the tournament and will meet again for the sixth time; In the precedents, the Japanese sends 3-2, who precisely, last year fell to the North American in the semifinals of Melbourne.

Williams’ triumph, in clear progression these days, was not just any one, since he reached 362 victories in the Grand Slams and in this way equaled Roger Federer’s record. Behind them, far behind, are Martina Navratilova (306), Novak Djokovic (301), Chris Evert (299) and Rafael Nadal (286). In the case of beating Osaka on Thursday, Serena would already rule alone.