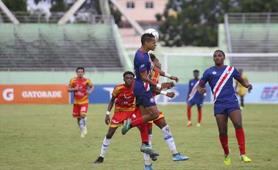 This weekend the semifinals of the Dominican Football League 2020 begin with the first leg matches that will be played between Saturday and Sunday. O&M FC, Cibao FC, Atlético San Cristóbal and Delfines del Este are the teams that will seek to reach the final of the tournament that awards
two tickets to the 2021 Caribbean Club Cup.
The commitments will be played at 4:00 in the afternoon and will be broadcast through CDN Deportes and the LDF Live digital platform.
On Saturday at the Pan American Stadium in San Cristóbal, the fierce Atlético San Cristóbal will receive a visit from O&M. The locals come from eliminating Atlántico FC in the playoffs, a team that had not lost in the contest, while the university students finished leaders of
the South Zone.
Both teams collided on a couple of occasions during the first phase of the competition and in the two games the eleventh academic won the victory two to zero. The only loss for that first leg match in this bracket will be O&M, since it will not have forward Domingo Peralta for
accumulation of cards.

On Sunday Cibao FC and the surprising Delfines del Este will begin to play the other key at the Félix Sánchez Olympic Stadium in the capital. Cetaceans have reached the hand of Dominican coach Edward Acevedo to their first semifinal after eliminating Atlético Vega
Real in the playoffs last week.
For its part, the orange troop reached this stage after winning the North group and it will be the first confrontation between these two teams this season. Cibao is the only representative of the Northern Zone that remains in competition.
It should be noted that the return matches will be played on Saturday 28 and
Sunday, November 29 to meet the finalists.