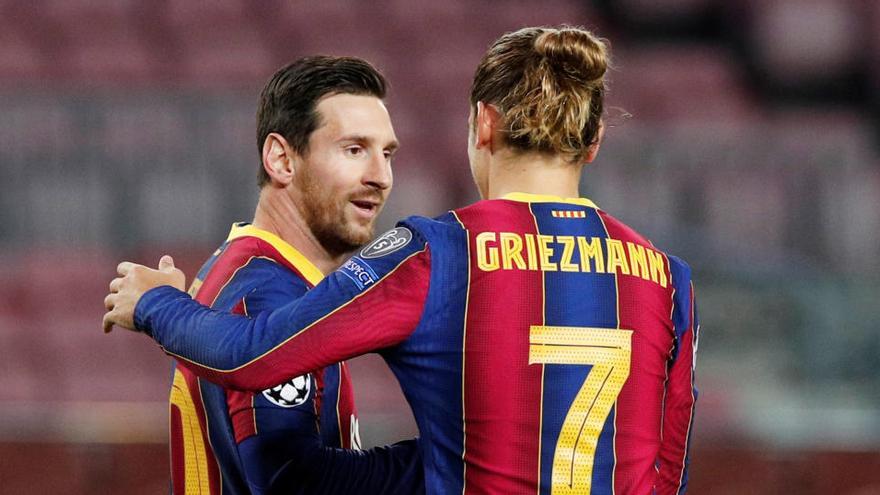 Even without the impact of Luis Suarez, low for Covid-19, and Sergio Busquets, injured, Atlético de Madrid-Barcelona proposes a midterm exam for the League at the Wanda Metropolitano, which exposes the evolution of the rojiblanco team, verifies Ronald Koeman’s project and faces Diego Simeone with a triumph still unattainable for him in this competition.

There is more pressure for Barcelona, six points and five places below Atlético, already with seven games played by both. The Barça team – winner of only one of their five most recent championship duels – also has more doubts than the rojiblanco, the only one still undefeated in this league, up on a sensational streak of 23 games without losing in the tournament – the best of currently in each of the European Leagues – and with four wins in a row.

As true as that Atlético de Simeone has never beaten him in the League. Yes in the Champions League, twice, or in the Super Cup, another time, and also once in a whole League, in 2013-14, but never 90 minutes away in the competition that marks the day to day, already with 17 clashes with each other: eleven defeats and six draws.

Barcelona was also the last visiting winner at the Wanda Metropolitano, on December 1, 2019, 0-1. And one of only three in his 61 league games in his spectacular stadium. Since then, Atlético has not lost at home -18 undefeated duels-. The decisive scorer that day was almost always: Lionel Messi. His numbers against Atlético are impressive: 32 goals.

The penultimate was that 0-1, in which he hit the wall that defined the duel with Luis Suárez, his partner then and his friend always. Today at Atlético, the moment of the ‘revenge’ of the ‘9’ for his departure from Barcelona, ​​of which he is the third highest scorer in history, is postponed by the covid-19, which postpones their expected reunion. He has scored five goals in six rojiblanco games.

From the prominence always of Messi, with the background controversy over the criticisms of Antoine Griezmann’s environment towards the figure of the Argentine and his statements on Wednesday (“I’m tired of always being the problem of everything at the club,” said Messi upon his arrival in Barcelona), and since the loss at Atlético de Suárez and the emergence of Joao Felix, with seven goals in ten games this season and with an absolute significance in Atlético’s showy offensive change this year, part of a match whose moment blurs more than ever in the entire era Simeone who is the favorite at three points. Barça always was. Now, it doesn’t seem so clearly.

In leader numbers, because it is three points behind the top of Real Sociedad With two games less, and with only two goals against in seven games, less than anyone else, Atlético is also facing the confirmation or not of Simeone’s commitment to more offensive plans, with more possession, more volume of play, more dynamism and more ambition, beyond the presence of Luis Suárez. Evident so far on the course, this clash is a good measure.

It is also for Barcelona and Ronald Koeman, against a vital game for the Barça players to climb to the top of the table after an uneven tournament start and forced to win if he wants to reduce the distance against a direct rival for the title.

It arrives, like Atlético, with its troops decimated by the effects of the ‘FIFA virus’ after national team matches. In addition to the expected absences due to injury to defenders Samuel Umtiti and Ronald Araujo and forward Ansu Fati, Barça lost midfielder Sergio Busquets to the Wanda match, with a sprained left knee that was done last week in the game between Spain and Switzerland of the League of Nations.

Miralem Pjanic could replace Busquets in the double pivot as a partner of Frenkie de Jong. Although the main novelty in the Barça line-up could be the return of Brazilian midfielder Philippe Coutinho, who has received medical discharge after almost a month injured in the hamstring in his left leg.

Coutinho could play on the left wing taking advantage of Fati’s absence, with Ousmane Dembélé on the right wing, Antoine Griezmann in the half forward and Lionel Messi in the position of false ‘9’ completing the attack of the team of Ronald Koeman.

Opposite, altered by the loss of Luis Suárez, but also that of Héctor Herrera, stopped by a muscle injury (neither Lucas Torreira nor Sime Vrsaljko nor Manu Sánchez are available for a total of five casualties), Atlético’s eleven recovers Yannick Carrasco at one end and maintains the lines in the rest of the posts.

Jan Oblak will follow, in goal; Kieran Trippier and Mario Hermoso, on the sides; Stefan Savic and José María Giménez, in the center of defense; Marcos Llorente, Koke Resurrección -with the very high level that he has shown both in the team and in his return to the national team this season-, and Saúl Ñíguez in the center of the field; Y Joao Félix and perhaps Ángel Correa, up front.

Diego Costa is expected to be a substitute, after his recent recovery from a muscle injury that has kept him out of six games. Also available is Víctor Machín, ‘Vitolo’, from the injury suffered against Lokomotiv Moscow two and a half weeks ago. They both aim for the bench, just like Geoffrey Kondogbia.