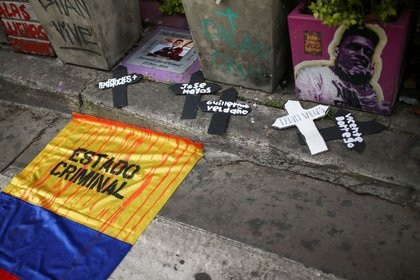 FILE PHOTO. A Colombian flag appears painted with the phrase “Criminal State” in a protest in Bogotá over the growing number of murders and drug violence. August, 2020. REUTERS / Luisa Gonzalez

BOGOTÁ, Nov 22 (.) – At least 12 people have died and four were injured in two massacres in different regions of Colombia related to drug trafficking, authorities said Sunday.

In the most serious incident, eight people were murdered inside a coffee farm in the municipality of Betania, in the department of Antioquia, in the center of the country, in an apparent dispute over drug trafficking.

“Ten heavily armed men arrived at the La Gabriela farm and fired indiscriminately at 14 people who were staying there,” the mayor of the municipality, Carlos Mario Villada, told local radio Caracol.

“Apparently the disputes over the vice squares of our municipality was what caused the massacre,” he added.

Collective murders have increased in the last year, amid disputes over the drug trafficking business in the South American country, one of the main producers and suppliers of cocaine.

Criminal gangs, far-right ex-paramilitaries, the guerrillas of the National Liberation Army and the dissidents of the defunct Revolutionary Armed Forces of Colombia (FARC) that departed from a peace agreement signed with the Government in 2016 are participating in the contest.

Meanwhile, four people died after being shot in two establishments while consuming alcohol in the municipality of Argelia, in the department of Cauca. Two people were injured.

The department’s secretary of government, Luis Angulo, said that the ELN and FARC dissidents are present in the area.

Defense Minister Carlos Holmes Trujillo offered two rewards for a total of $ 68,500 for information leading to the capture of those responsible.

Drug trafficking is the main factor of violence in Colombia, according to the authorities, and the internal conflict that has plagued the country for more than five decades has left more than 260,000 dead and millions displaced.