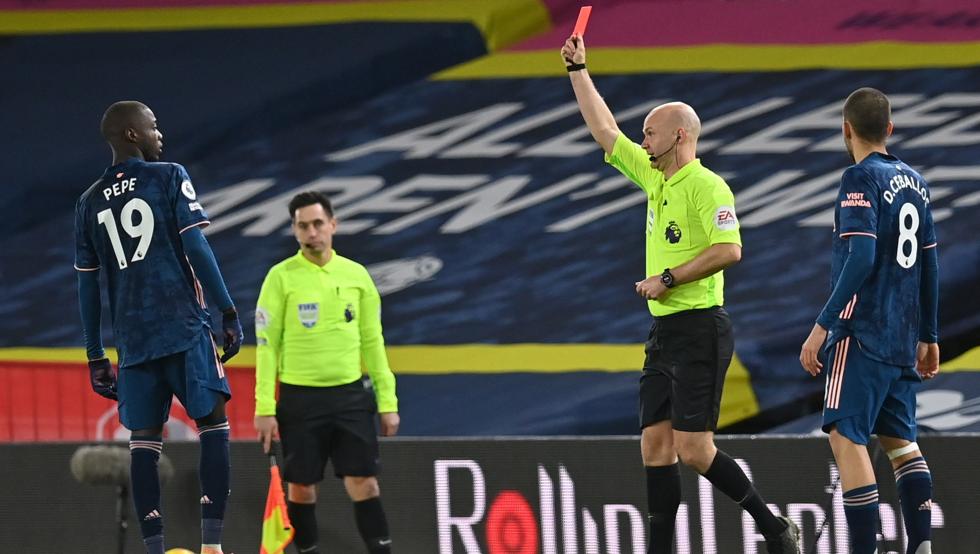 The fight between Marcelo Bielsa and Mikel Arteta ended with a draw after Arsenal resisted in Elland Road in numerical inferiority from the beginning of the second part due to an expulsion of Nicolas Pépé against Leeds that crashed up to three times against the sticks. The 0-0 keeps both teams in the middle zone of the Premier due to their irregular start to the season: the ‘Gunners’ occupy 11th place and the ‘Whites’, 14th.

Arteta retouches the scheme due to casualties

Mikel Arteta was forced to retouch his system because of the losses of Thomas Partley, with physical discomfort, and the Egyptian Mohamed Elneny, who tested positive for Covid-19 with his team, as did the Bosnian Sead Kolasinac. The Arsenal coach changed the 3-4-3 to 4-2-3-1 with Héctor Bellerín and Kieran Tierney as a winger in a defense of four and ahead of Dani Ceballos and Granit Xhaka in the double pivot.

Arsenal started moving the ball well precisely with Ceballos as the protagonist in the media. The Andalusian started a few days after transcending his brawl in a training session with David Luiz, who caused blood to his nose with a punch. The Brazilian, on the other hand, was not summoned due in principle to other causes not related to the incident.

Ceballos stake at the start

Ceballos was the first player to hit the goal with a shot that went wide (10 ‘), but little by little the former Real Madrid and Betis were diluted along with his teammates before the push of Leeds and his incisive game for the bands.

In the 13th minute, Patrick Bamford shot into the hands of Bernd Leno after a good move between Jack Harrison and Ezgjan Alioski down the left. Nicolas Pépé responded with a brilliant breakthrough that culminated in a poisoned cross that hit the crossbar, allied to a surprised Illan Meslier (21 ‘).

The lack of success, lament of Bielsa

It was the only shot, so to speak, between the three Arsenal sticks in the first half since Leeds went to more and went to rest with much better sensations, although they lacked the success again, as Marcelo Bielsa lamented before the party, to culminate the opportunities available to him.

The clearest in the 31st minute, when Gabriel Magalhaes rejected a cross and Bamford released a first shot that Leno took out in a display of reflexes.

Red to Pépé at the request of the VAR

Neither Leeds nor, above all, Arsenal had just skipped, but an unsportsmanlike action clearly decided the dominance of the Leeds side. Pépé, hot from a previous strike, headed Alioski without mediating the dispute for the ball and the referee, at the request of the VAR, showed him the direct red card (51 ‘).

The expulsion increased Leeds’ possession to even 75 percent and he insistently searched for the goal but was resisted by slightly deflected left-footers from outside the area of ​​Stuart Dallas and Rodrigo Moreno, who entered in the 71st minute. The former Valencian player tried again with a traced shot that this time repelled the crosshead (78 ‘).

The final quarter hour had the emotion that the game lacked for many minutes. Leeds turned upside down and left spaces that Arsenal took advantage of to lavish some very dangerous cons. Thus, Pierre-Emerick Aubameyang claimed a penalty by a defender when he intercepted his shot, but the VAR did not consider it (80 ‘).

Bellerín leaked a ball that left Bukayo Saka alone in a one-on-one with Meslier who providentially covered his attempt (84 ‘). Leeds’ final arreón crashed into the posts again, which repelled a Bamford header and a Raphinha kick.

In the end, the 0-0 did not satisfy either one or the other in their attempt to climb positions in the table but Arsenal left with the feeling that they saved a point.